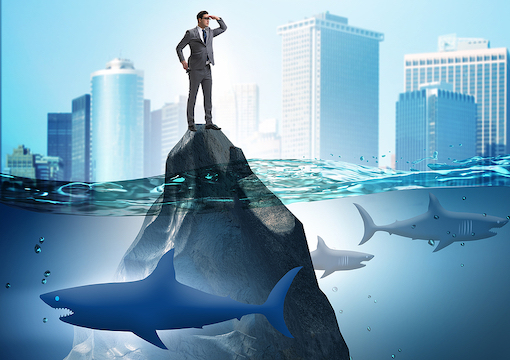 If you were to round up a random collection of people and lock them up in a school gymnasium, you would have a bunch of people locked in a gymnasium. It would not be a society or a movement or a religion. The reason is those people would have nothing in common, other than the fact that they had been lured to the gymnasium and were now being held against their will.

Now, round up a random collection of people and put them on an island far enough away from land that they could not chance making a swim for it. Maybe they do not even know where the island is in relation to a large, populated landmass. Further, they have no indication that they will be rescued. They are there possibly forever. Unlike the people locked in the gymnasium, this group will begin to change in character.

For starters, they will now have an important thing in common. They are castaway on an island with no chance of return. Whatever sense of identity they had in their old life now takes a back seat to this new identity. Being a gamer, a mother of dogs, a foodie, or whatever they put on their social media page is no longer important. The prevailing identity of the group is now their condition as castaways.

“Not only has morality been turned on its head, but the underlying logic of human relations has been destroyed.”

Of course, in any situation where a group of people find themselves requiring cooperation, someone has to be in charge. Usually this comes naturally, as some men are natural leaders and most people are natural followers. Still, this has to be sorted before any meaningful work is done. Those leadership males will need to compete and establish their dominance and hierarchy. Someone will be in charge.

Along with figuring out who is in charge comes figuring out the rules that will govern the behavior of the group. At first, this will be about the division of labor. They have to make shelters, collect food, purify water, and so on. Then come the rules regarding sex and violence, which always come with human organization. Maybe some of the old customs from the past are recycled, maybe some new ones are created.

Right behind sex and violence in all human groups will come the exchange of labor and the negotiation of agreements. Trog only agrees to pay Grog to clean the cave, because there are rules governing the payment of Grog and what Trog can expect in return from their agreement. Like those customs guiding basic human relations, there has to be a set of rules to govern trade between members.

This is where libertarianism collapses into laughable nonsense. These customs and rules for governing the relations between members of the group must be enforced by the people in charge. Otherwise, there is no reason to obey the rules. That is the final piece of the island paradise. There has to be agreed-upon punishments for breaking the rules and a clear process for the people in charge to apply those punishments.

These are the basics of all human organization. A social club like the Shriners, for example, has all of these things. Those guys wearing funny hats and driving tiny cars at parades are part of a group with a clear identity, a leadership hierarchy, a set of shared beliefs about personal conduct and punishments for violating the rules. This is what allows them to maintain their existence as an organization.

This was the basis of countries, until fairly recent. The nation-state was the recognition that human identity groups were the basis of human organization. A stable country like Great Britain had a common language and history. Identity groups like Welsh and English were sublimated to the British identity. Even so, they had their own cultural spheres that were tolerated and respected by the whole.

Unstable countries like those in the Middle East or Africa were riddled with competing identity groups that had no shared sense of identity. Tribes were often split between two or more countries. Someone in Iraq does not primarily identify as Iraqi. Instead, he is an Arab or a Shiite or one of the many powerful Arab tribes. Lacking those basic necessities of human organization, these countries are inherently unstable.

This is something to keep in mind as the new ruling regime tries to figure out how to keep America from breaking apart. Even with the anointing of Mumbly Joe Biden as president, half the country still hates the other half, and that second half is working up a good hatred for the first half. A big reason for that is the rulers cannot answer any of those important questions that define any human organization.

In fact, they are actively making war on the first question. For close to a generation now they have been denying there is such a thing as American. It is merely a social construct with no fixed meaning. Anyone can be an American. This is the argument for inviting the peasants of the world to settle in your neighborhood. When Axmed Yusuf Qaasim, formerly of Darfur, is as American as Bob Smith from Georgia, “American” no longer has meaning.

On the second question as to who is in charge, we no longer really know who is running things anymore. Corporations with whom you have no business dealings now dictate what you can say in public. Banks can cut people off from the economy without fear of the government. Politicians do things, but nothing the public wants or expects. Someone is pulling their strings, but those people in the overclass are a complete mystery to us.

As far as those rules, customs, and taboos that grease the wheels of human relations, those have been systematically dismantled and replaced with weird new rules. The great and the good say being white is a crime, but the worst crime is noticing that nonwhites commit most of the crime. Not only has morality been turned on its head, but the underlying logic of human relations has been destroyed.

What the new regime inherits is a tinderbox of its own creation. Generations of making war on the basic rules that make human organization possible have led us to civil unrest and a divided, embittered people. They took away that which made it possible for disparate people to coexist. Now they demand that everyone come together and celebrate the people who made it impossible to live a peaceful life.

This will not end well.