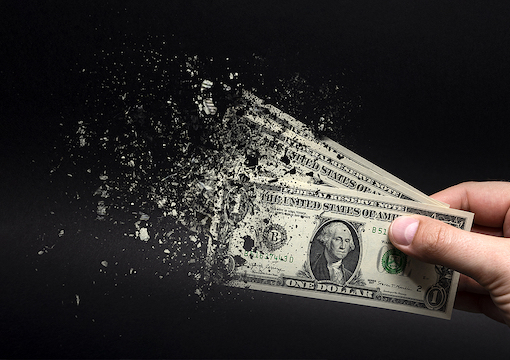 Money, as most people understand it, is the bits of metal and paper issued by the country where you live. For Europeans, it is the colorful stuff issued by the European Union, rather than your home government. Even so, no one thinks much about money beyond what it can do for you. It is the cool stuff you can buy, how much you earn, and how much you have to spend for the things you need to live.

The West is suffering from inflation at the moment, so people are noticing that their money buys less than it did in the recent past. In most Western countries, fuel prices are 50 percent higher than a year ago. Food prices have doubled for some items, and the price hikes have only just started to bite. Britain is warning that they are facing the biggest drop in the standard of living ever recorded.

It has been over forty years since the West has seen this sort of inflation. That assumes the official numbers are accurate, which is unlikely. In the United States, official inflation is 7 percent, but that is using the new math. If we were using the same math we did in the 1970s, then the real number would be close to double. That is on top of the shrinking-container phenomenon called shrinkflation. Not only are prices going up, but the containers are getting smaller.

“Washington can no longer control the global economy by having a monopoly on the currency of the world.”

Experts are torn on how to blame this on someone other than the people who are responsible for it. Some say it is due to the supply chain disruptions caused by the Covid lockdowns. Of course, no one asks why the people who imposed the shutdowns did not think of this at the time. Others blame the price hikes on the sudden expansion of demand after the Covid panic subsided. Some, of course, blame Russia.

The main reason is that the Federal Reserve and the European Central Bank created trillions of dollars and euros out of thin air during the Covid panic. Throwing everyone out of work would result in food riots, so they showered the public with free money as a form of riot insurance. The trouble is the money did not magically go away, so we have the classic problem of too much money chasing too few goods.

Then there are the systemic troubles created by a generation of outsourcing and the general incompetence of the ruling class. They allowed the supply chains to become fragile by letting business chase the cheapest labor rates. This means everyone is now dependent on the least organized countries. Ukraine, for example, is where half the world’s neon used in making computer chips is produced.

That is only part of the problem. Since the invention of the petrodollar, America has been able to print as much money as it needs. The dollar is the default currency of the world, so those extra dollars always had a place to go. They would be spent on trade and then get reinvested by foreigners, usually foreign governments, back into U.S. Treasuries, which props up the massive spending by Washington.

The Global American Empire has been supported for the past half century by a novel form of seigniorage. This is the difference between the value of money and the cost to produce and distribute it. In the old days, the king would make a profit from the minting of coins used in his kingdom. This was usually a tax added to the total cost of a coin on top of the cost of production. This was the king’s profit from coinage.

Since the Louvre accords in the 1980s, Washington has been able to swap securities for newly printed banknotes by the Federal Reserve. This would normally impose an inflation tax on the public, but the dollar being the reserve currency of the world spread this tax over the global economy. Inflation rates in the United States remained low, as long as global growth remained high and the world was willing to tolerate this system.

Those last two items are why inflation will not be abating anytime soon. The chaos created from the Covid lockdowns has effectively stifled global growth. Those dollars and euros no longer have cheap labor markets to fill. Asian growth rates in particular have been slowing for some time. There is also the fact that Asia is no longer the cheap labor paradise it has been since the 1990s.

The bigger issue is that the rest of the world is losing interest in the system that profits Washington at their expense. China has been manipulating its currency for a few years as a way to prevent Washington from exporting inflation to Beijing. She has also been quietly building parallel financial structures, along with Russia and India, in order to escape the perfidious rules imposed by Washington.

This is the subtext to the war in Ukraine. Washington assumed they could destroy the Russian ruble and thus the Russian economy. The ruble took a dive, but the Russians were prepared, and it has fully recovered to its prewar levels. This is an enormous change as it reflects a new reality in the world. Washington can no longer control the global economy by having a monopoly on the currency of the world.

This is why the current inflation is neither transient nor manageable. The Western economic system is based on the dollar, and by extension the euro, operating as the reserve currency of the world. The massive debt loads of Western nations assume that they can create money from thin air, not create inflation and set the interest rates to near zero for government borrowing.

What this means as a practical matter is that the West is about to get much poorer and do so in a highly disorganized way. Not only will the standard of living decline due to inflation, but government spending will have to be radically reduced. The great welfare states and the American military machine were only possible when the cost of these things was subsidized by the world. The world is no longer willing to do that.

Western people are about to learn that those bits of metal and paper we think of as money are more than just a way to buy stuff. They are a store of value, and that value is the cultural strength of the society that issues them. The West has been in decline for a long time, but it was covered over by financial legerdemain. The free-money era concealed the great cultural looting of the West. That era is now over, and Western people will soon have to pay the price for it.