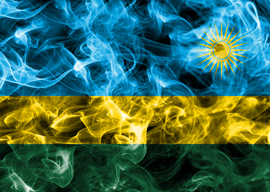 A few years before the genocide, I traveled through Rwanda. It struck me then as having been, by African standards, a very well-organized country. You had only to look over the border to the Congo, or Zaire as it was then called, to see the difference. On one side chaos and mess, on the other order and neatness. This was not my impression alone; the country was known as the Switzerland of Africa.

Administrative competence is the last thing you want during a genocide, but even though I knew of the ethnic conflict and past massacres that had taken place in both Rwanda and its neighbor to the south, Burundi, usually as mirror images of each other, it never occurred to me that it might one day be used to bring about the most efficient genocide in history.

Rwanda was a highly populated country, and the women there had on average nine children each. Since most people were still farmers, pressure on the land was one explanation later put forward to explain the genocide. But the impulse for the genocide came from those who were least dependent on the land; and much of the land owned by those murdered during the genocide was not occupied immediately afterward but allowed to lie fallow. Tutsi property was not so much appropriated as destroyed. Something more was needed to explain it.

How far the two main groups—the Hutu and the Tutsi—were genealogically and biologically distinct is still a matter of dispute. When I was there, an old Belgian Rwanda-hand spoke to me of the tall thin ones (the Tutsi) and short strong ones (the Hutu), the former being owners and herders of cattle, the latter being tillers of the land. The Hutu were said to be Bantu and the Tutsi Nilotic in origin; but whether or not any of this was true (there was a lot of intermarriage between them, they spoke the same language, people could change their ethnicity), the fact is that the population was deeply divided in its loyalties. Fifteen percent were Tutsi and 85 percent Hutu; the Tutsi, traditionally dominant, were excluded from political power but were believed, at least by the Hutu, to be still educationally and economically dominant, as they had been during the time of Belgian rule. (The Belgians, on the whole, had a higher regard for the Tutsi than for the Hutu, regarding them as far more intelligent.) Quotas were imposed by the Hutu government to try to limit Tutsi prominence and to even things out in the name of justice. Oddly enough, no amount of positive discrimination in favor of the Hutu, or negative discrimination against the Tutsi (the two, of course, were mirror images), could assuage the Hutu feeling that they were in an inferior position to the Tutsi.

“What a relief it was to find that a Western country has finally caught up in enlightenment with Rwanda circa 1963!”

It is hardly surprising that an immense number of books, from almost every conceivable point of view, have been written about the genocide. I am no specialist—my interest in the country is only that of one who once spent a few days traveling through it—but I read two or three about it a year. The latest is Le génocide des Tutsi du Rwanda by Florent Piton, a French academic. Once again, I was struck by the beauty of the Rwandan language, Kinyarwanda, and by the lovely names of the Rwandans: Déogratias Mbandiwimfura, for example, or Dismas Nsengiyaremye, or Faustin Twagiramungu. One of the worst of the genocide’s progenitors was Théoneste Bagosora. As Juliet asked, what’s in a name?

In Piton’s book, I read an extract from a pamphlet, titled “The Antiracial Revolution in Rwanda,” by the independent country’s first minister of justice, Anastase Makuza. Until then, I had not realized how much in advance of the rest of the world, or at least of the West, Rwanda had been.

The government programme of the first legislature must suppress the innumerable discriminatory obstacles of a political, legal or social nature…in all the organisations, culture, public and private life of Rwandan society, but also stimulate and assist all the social classes that have been their victim, to raise them to the level of the privileged classes.

The authorities of the Republic prefer to opt for an egalitarian policy, based on a total democratisation of all national values according to which first every individual, then every human group, can profit from his personal merit and his usefulness to all the collectivity and not according to his origins or his racial origin, ethnicity or religion….

The other day I received an invitation to apply for a high position in the public administration, well paid and interesting. I am, of course, too old for job applications, but if I had been younger I might have been tempted.

The employing organization said that it was nondiscriminatory in its hiring policies with regard to race, religion, sexual orientation, disability, etc. Of course, this was a lie, for one of the criteria of employment was high intellectual ability, which by definition the mentally disabled do not have. But let that pass. Woe to the candidate who points it out!

In addition, however, the nondiscriminatory employment policy “particularly welcomed applications from women, racial minorities and people with disabilities.” This, surely, could only have been in order to discriminate in their favor, for otherwise such a welcoming policy would be only a cruel charade. Here at last was antidiscriminatory discrimination.

What a relief it was to find that a Western country has finally caught up in enlightenment with Rwanda circa 1963! Perhaps in another 31 years (the period between the anti-racial revolution and the genocide) we too can have a genocide, or indeed many genocides, insofar as our populations will be divided into many more genocidable groups than Rwandan society ever was.

Genocide is, of course, a fundamentally egalitarian institution. It irons out group differences within a society, admittedly in a rather drastic way. Communism failed to bring about equality, but of course there are those who say that it failed because it was not carried out thoroughly enough, despite the scores of millions dead. Is it not time to give the Rwandan model a chance?