The Thing About Helvetia… 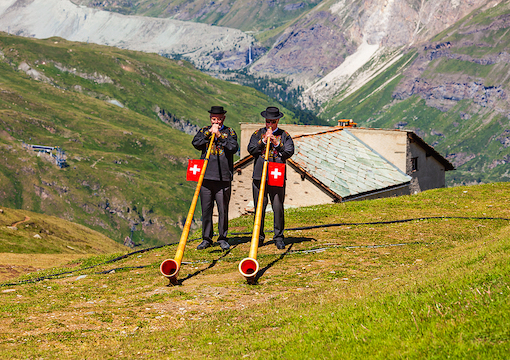 GSTAAD—When Gerald Murphy and Cole Porter discovered the French Riviera as a summer resort during the early ’20s, the swells and avant-gardes still spent the warm months in cool places like Deauville and Baden-Baden. I thought of the deserted summer Riviera and how marvelous the place must have been when people like Picasso and Hemingway joined forces with Cole and Gerald and launched the resort to end all resorts. No longer. The place is now an overcrowded hellhole, expensive, dirty, and dangerous, but not to worry. If the recent heat waves continue and the temperatures keep climbing, soon we’ll be right back where we started from, except this time it will be Sylt in northern Germany for the have-a-lot elites, and the boiling Riviera, southern Italy, and Spain for the have-a-lot-less peons. (Orkney instead of Mykonos.)

This has to be good news for my Swiss friends here in Gstaad, who always worry about the lack of snow and lack of height of their winter wonderland, only 3,300 feet. “You will be known as a summer resort,” I tell the perennial worriers, “all it takes is a bit of role reversal.” And they’ll have a longer season, too, four months as opposed to two in the old days. They’re funny, the Swiss, known as dullards because they lack Italian fire and Spanish passion, but what would we do without them? They are models of good deportment where racial matters are concerned, and their manners are impeccable, formal but polite to strangers, whatever their creed or color may be. Europe may be a sitting duck for an Islamic attack after Kabul’s demise, but walking down Gstaad’s main street last week, it was anything but. A Gulf Arab was window-shopping accompanied by five totally covered females, if they were of that sex. They could have been anyone, Hamid Karzai, Ashraf Ghani, perhaps even Imran Khan, yet no one paid any attention.

“Woke virtue-signaling masquerading as morality holds no ground up here in the mountains.”

There are no “Kill Cops” spray-paints as there are in America here, no fraying social fabric, no rioting for riot’s sake, no extinction rebellion bulls—. There is no animosity toward one another, yet the Swiss speak four different languages, German, French, Italian, and Romansch. The tribalism that exasperates and fuels mistrust in other countries does not exist here, and most of the crimes committed are by foreigners.

Mind you, the Swiss practice direct democracy and are not led by feckless central elites who shrug their shoulders as their borders are overrun. The unelected mini-Napoleons in Brussels, who long ago pulled a fast one on Europe, have tried everything to force the Swiss to give up their independence, but to no avail. In France, Italy, and Germany, race has created a chasm that only obese screen addicts who have been housebound for years have failed to notice. Not so over here. Woke virtue-signaling masquerading as morality holds no ground up here in the mountains. Gruff peasants like their own kind, yet the veneer of conventional sociability endures. This should be a breeding ground for fighting among races and creeds, yet it is not. Moola is the great pacifier. In fact, all Swiss are implicitly enlisted in a common cause: that of making money.

The latest mini-war between those of us who own property, and new arrivals who wish to obtain properties, is not exactly the type of conflict that would move Leo Tolstoy to write about it, nevertheless the war is on and it’s bound to get warmer. The reason is size; we old-timers, like hookers, prefer small. The nouveaux think bigger is better. Russians want big chalets with swimming pools and many floors. (And bulletproof windows.) We believe in recently passed laws that say only primary residence permits for new buildings are allowed. Smart-aleck local real estate sharks have found ways to avoid such restrictions. Nothing is a fight to the finish in good old Helvetia, and time marches on and all that, but greed sprints and most of the time it wins. I predict big new buildings will be built because—as Groucho Marx never said—the smaller the willy, the bigger the chalet.

Otherwise everything is hunky-dory. Last week I went to the Olden for a dinner given by Philip Cornet, who—along with his twin brother and his mother—owns Stella Artois. We sat outdoors during a cool evening, the dinner in honor of Peter and Lara Livanos. I sat next to Philip and filled him in about Stella’s greatest booster. He has drunk twenty cans a day for forty years and has not put on an ounce, and even his granddaughter is named Stella. He posts pictures of his Christmas tree decorated with Stellas. “Mon Dieu,” said Philip, “we must meet this man, is there anything we can do for him?” The name is Tim Hanbury, he owns 3 million acres near Plymouth, and he was born in a house that makes Buckingham Palace look like a doghouse, I told him, and Philip took it down and said he will keep me abreast of things. Later on, and after a few very stiff drinks, I muttered about the brilliant marriages of Timmy’s daughters, and Philip got even more excited. Perhaps a shoot at one of the great houses with the father-in-law sipping Stella? I see it as a winner, although I know nothing about such matters.