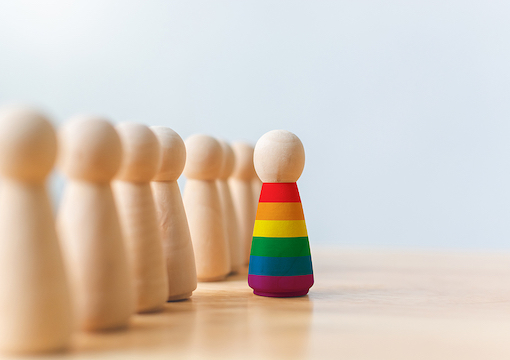 The Week’s Most Muttering, Fluttering, and Stuttering Headlines

In 1978, TV producer Norman Lear decided to dangle some “outrage bait” to get people talking about his aging sitcom All in the Family. So he partnered with Ideal Toys to create a 14-inch doll of Archie Bunker’s infant grandson Joey…complete with a big ol’ wiggly pee-pee. It was the first “anatomically correct” doll ever manufactured by a major U.S. toy company.

Lear got the outrage he sought. “How dare you stick a dirlywanger on a doll!” the blue-hairs shouted.

Back then, the prudes were older conservative Christian folk. Forty-three years later, the baton has passed, and now our modern-day morality police—LGBTQetceteras—are demanding that the plastic peckers must go! There can be no distinctly male or female toys.

And as always, California Democrats are leading the way! Chairman of the Lavrentiy Beria fan club Gavin Newsom, who moonlights as governor of California, just signed a law mandating that retailers must have only “gender neutral” toy sections, with no toys that are specifically male or female. So from now on, dolls will be next to fire trucks and Easy-Bake Ovens will be next to G.I. Joes.

What a joy that’ll be for parents shopping for Christmas gifts this year!

“Where can I find the Rainbow Brites?”

“Right next to the erector sets. Where else would they be?”

Weird how during the recall election, Newsom failed to mention that he’d be signing this law.

Lego has also announced the end of gender-specific toys. As with the California law, this is being done to appease men in dresses. Amazing that trannies call themselves “marginalized” when the entire world seems to revolve around them these days.

The good news for parents is that none of it’s going to matter this year anyway, as the supply chain gridlock will keep the shelves empty of all toys, penises or no.

ELECTION HAS KOREANS SITTING ON PINS AND NEEDLES
Korean politics can be a real pain in the ass.

The people of South Korea are obsessed with a presidential candidate’s rumored booty call. As in, he called a guy to stick needles up his booty.

South Korea has a presidential election coming up, and Yoon Seok-youl is the front-runner. He has the Chinese character “wang”—which translates to “king”—tattooed on the palm of his hand. In Korean culture, this is associated with superstition: Korean soothsayers believe that inscribing the character on the palm of the hand will bring good luck (Yoon’s wife is a fortune-teller).

Amazingly, Yoon’s wang-hand is the least odd thing about the guy. He also likes getting needles stuck up his butt.

“Once you’ve admitted to getting pleasure from having your sphincter used as a pin cushion, what possible calumny could top that?”

Yoon is with the conservative People’s Power Party (it used to be the Up with People Party until Koreans saw a videotape of that group’s Super Bowl halftime performance in 1986). It’s unlikely there’ll be any fabricated Steele-dossier-type smears against the guy; once you’ve admitted to getting pleasure from having your sphincter used as a pin cushion, what possible calumny could top that?

But she’s been MIA as the world’s been hit with a massive energy crisis, brought on in no small part by countries turning away from cheap, reliable sources of energy in favor of expensive, unreliable “green” alternatives. Seems that climate activists never took into account the unintended consequences of crippling the traditional energy sector (“how unaware you!”). And now Europe and a host of nations worldwide are struggling to keep the lights on.

As reported in The Washington Post, “Energy analysts argue that Europe moved too quickly away from fossil-fueled power, before ensuring that sufficient renewable sources could take up the slack in an emergency.” As an example, the Post cites “a protracted calm spell over the North Sea that’s sharply curtailed the output of electricity-generating wind turbines” (“how lack-of-air you!”). On the other end of that spectrum, in the U.S. turbulent oceans and hurricanes have taken out vast swaths of “green” energy facilities (“how mal-de-mer you!”).

Yes, let the commoners go broke or freeze to death; we don’t give a damn (“how devil-may-care you!”).

The punchline to the extended joke we call “green energy” is that the energy shortage caused by shortsighted children in the name of reducing carbon emissions is going to produce record carbon emissions as nervous political leaders scramble to ramp up fossil fuel production so that voters have lights and heat for the coming winter.

Sadly, nobody’s taking little Greta up on her suggestion that rather than relying on home heating, people should just wear heavier sweaters.

THE LOCH NESS MOMSTER
Remember those dark, ignorant, superstitious days when people believed in…women? What an embarrassing time for the human race.

“Women”? Why not also believe in Yeti and Bigfoot?

Fortunately, the same doctors who took pharma money to get half the country addicted to opioids, who call natural immunity a myth, and who want to put Covid masks on babies, are on the scene to disabuse us of our irrational claim that women exist.

In the U.K., home of the world-record holder for a doctor who erased women (balmy Dr. Shipman, who erased 250 ladies via hot doses of diamorphine), the medical establishment has decided to end cervical cancer testing outreaches to women. According to Scottish public health minister Maree Todd, anyone can get cervical cancer, so telling “women” to get smear tests means indulging in the ridiculous superstition that “women” exist and have distinct biological features.

And over in England, Labour MP Rosie Duffield has been accused of hate crimes for claiming that only women have a cervix.

And it’s not just the U.K. The “prestigious” Mayo Clinic recently changed its web page on cervical cancer to eliminate any mention of the word “women.” Compare the current page with the archived version. “A woman’s immune system” is replaced by “The body’s immune system.” “Most women with the virus never develop cervical cancer” became “Most people with the virus never develop cancer.” “Most medical organizations suggest women begin routine Pap tests at age 21” transitioned to “Most medical organizations suggest beginning routine Pap tests at age 21.” And “HPV vaccination is available for girls and women ages 9 to 26” was removed entirely.

Hooray for 21st-century doctors! Without them, we’d all be believing in chupacabras, mothmen, and dames.

DELICATE BUT DANGEROUS
And if you’re wondering why so many “respectable” doctors are going along with this tranny nonsense, here’s why: As reported in The Sunday Times, a professor at the University of Sussex has been told by police to hire bodyguards and install CCTV outside her home following threats by the “oh-so-fragile” transgender community.

As a result, trannies—who are supposedly so frail that a single joke can break them—have been posting death threats online and harassing the professor in person. She’s been advised by police to only teach remotely, and cops have given her a special hotline to call if she’s under assault.

Wow, those trannies sure are shrinking violets! They’re like Southern belles who get the vapors…except the vapor is sarin gas.

The Times interviewed several University of Sussex students, who uniformly called for Stock’s firing. The repeated reason? Her comments “put transgenders at risk of violence.”

The very people threatening violence are claiming that they’re the ones at risk of violence. Yet while the violent threats against Professor Stock have been documented, not a single tranny has shown proof that they’ve been “threatened” because of her words.

The tranny cries out in pain as zhe strikes you.