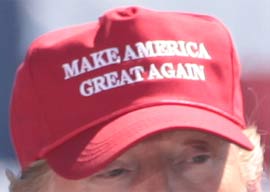 TAKE AMERICA’S HATS AGAIN
In a national epidemic of “soft lynching” that seems designed to degrade and humiliate, people wearing “Make America Great Again” hats are being attacked by illiterate cretins who’s minuscule brains have been programmed to believe that Donald Trump is a bigger threat to national security than Kim Kardashian, Facebook, and herpes. This trend is being referred to as “hat crimes.”

This week brings three stories of three white Americans being assaulted by three nonwhites—one of whom has overstayed her visa since frickin’ 1994—whose primitive reptile brains were triggered at the site of the red “MAGA” cap like a retarded bull is driven into a meaningless rage by a matador’s cape.

Forty-one-year-old Rosiane Santos of Falmouth, MA, has been arrested and charged with assault, battery, and disorderly conducted after yanking a MAGA hat off the Caucasian cabeza of a 23-year-old Trumper named Bryton Turner. According to the alleged victim, he grew so annoyed at the heckling of Santos—who apparently drinks on the job—that he began recording her as she taunted him for daring to be such an antisocial psychoapth that he wore a hat honoring the nation’s president.

According to a police report, when cops arrived, Santos explained that a MAGA hat has no place in a Mexican restaurant. As they carried her off to jail, she again tried to remove the hat from Turner’s head.

When contacted by a reporter, Santos offered the following apologia:

I had a little bit to drink maybe that’s the reason that I couldn’t walk away but being discriminated for so many times in my life, I just had to stand up for myself. He’s not a victim. I am the victim. I have been bullied, OK?

Santos has reportedly been taken into custody by ICE officials and will likely be sent back to Brazil.

In the breathtakingly scenic state of New Jersey, a 19-year-old black teen has been arrested for allegedly attacking an 81-year-old MAGA-hat-wearing man in a grocery store. According to the victim, the youth verbally taunted him as he attempted to leave the store. Then he grabbed his hat, seized his arm, tossed him to the ground, and knocked over his cart of groceries.

Video footage from Oklahoma shows a white student who’s wearing a MAGA hat and toting a Trump flag being taunted by an 18-year-old black male who knocks the hat off his head, grabs his flag, and, ironically, calls him “nigger.”

If you haven’t heard any of these stories in the mainstream press, it’s no coincidence.

TEACHING BLACK KIDS TO PICK COTTON
It was only a few weeks ago that Virginia Governor Ralph Northam faced the soul-scalding experience of being called a “racist” due to some yearbook photos that either depict him in a Klansman’s outfit or in blackface—it’s hard to tell, because there were two people in the picture. Northam denied that either one was him, although he admitted he once dressed up in blackface to portray Michael Jackson in a dance contest.

Northam held onto his job by pledging to devote the remaining three years of his term to groveling before blacks and fellating the very idea of blackness.

“If you haven’t heard any of these stories in the mainstream press, it’s no coincidence.”

Then his wife goes and mucks up the program by asking some black students to hold cotton bolls and imagine what it was like to be slaves.

Apparently Virginia First Lady Pam Northam is involved in some tour where she takes students to some vintage cottage and tells them to hold samples of cotton and tobacco so they can imagine how much it must have sucked to be a slave. Her error here was to hold out the cotton for some black students to touch—in the year 2019, for Pete’s sake!

According to a black woman named Leah Dozier Walker, who actually has a job in something called the Office of Equity and Community Engagement at the State Department of Education, Mrs. Northam effectively whipped and raped the students:

The Governor and Mrs. Northam have asked the residents of the Commonwealth to forgive them for their racially insensitive past.…But the actions of Mrs. Northam, just last week, do not lead me to believe that this Governor’s office has taken seriously the harm and hurt they have caused African Americans in Virginia or that they are deserving of our forgiveness.

Del. Marcia Price, a black woman who’s a member of the state’s black caucus—sensing a pattern here?—scolded and shamed and remonstrated Mrs. Northam:

The cotton itself is a symbol of murder, rape, displacement and the radiating effects of the trans-Atlantic slave trade that black Virginians are still experiencing today….I don’t know that you have to have actual cotton handed to the children to understand slavery was bad.

In South Carolina, a black mother is distraught and upset and triggered and traumatized by the fact that her 10-year-old son was told to pick cotton and sing a “slave song” as part of a school project about…the Great Depression.

Don’t ask us to make sense of this. We’d rather stick knitting needles in our eyeballs.

HATE-CRIME HOAXES DU JOUR
Nikki Joly is an aggressively ugly, short and dumpy woman who claims she’s a man, possibly because by all known metrics, she fails as a woman. A local paper in her hometown of Jackson, MI named her “Citizen of the Year” after her efforts to open a gay community center, organize a gay festival, and pass an ordinance that forbids anti-gay discrimination.

Joly’s house burned down in 2017, killing the three cats and two German Shepherds that were inside. After the fire, she posted on Facebook, “Yes, be angry, be very angry. Use that anger to force good! Use that anger to make change.”

Now she has been arrested and charged with setting the blaze, allegedly because “he [sic] had been frustrated the controversy over gay rights had died down with the passage of the nondiscrimination law.” You heard that correctly—according to rumor, Joly killed all five of her pets because she was frustrated that the town wasn’t supplying her with an adequate dosage of hatred.

A black woman named Darnell Byrd-McPherson is the mayor of the itty-bitty, teeny-weenie town of Lamar, SC. Last month she claimed to be the victim of a savage hate crime when it appeared that someone had sprayed a yellow substance on her car. In the wake of this heinous incident, she told a TV reporter:

We are grateful the person or persons did not try to take our lives but the culprits will be identified and prosecuted….Love conquers hate and my husband and I refuse to be intimidated by those who perpetrated this act of vandalism which I classify as an act of hatred.

What kind of country to we live in where even pollen hates black people?

MALE STUDENT TOO DRUNK TO CONSENT TO SEX
After more than four years of having his name dragged through the mud on bogus rape allegations, a former student at Miami University of Ohio—which is the Ruth’s Chris Steak House of colleges—has been vindicated. Identified in court documents only as John Doe, he was suspended after a female acquaintance accused him of sexually assaulting her despite the fact that the school acknowledged that the girl had initiated contact and John Doe was too inebriated to consent. John Doe sued after his suspension, and a judge ruled that the school had been unfair in its kangaroo-court treatment of him. Doe and the school have agreed to a private settlement for an undisclosed sum, which should at least keep him awash in beer and hookers until he settles down with a gal who isn’t prone to false rape allegations.

FROM TRANSGENDER TO TRANSALIEN
Jareth Nebula—without even researching, we are convinced beyond the pubic-hair-sized wisp of a doubt that her parents didn’t name her that—is a female-to-male transsexual who describes herself on Facebook as “Trans/Agender, Demisexual/Graysexual, Blue Alien, MisfitGoth, Body Mods, Disabled, J-Fashion, Potato.”

If that isn’t enough to make you want to kick her in her nonexistent nuts, Nebula now claims she has grown tired of being transgender and wants to transcend it by becoming a “transalien” and wants to have her nipples surgically removed so she feels less human: