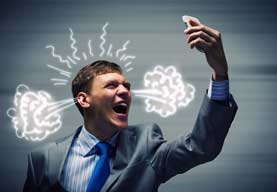 For even the most mildly sentient among us, living in the modern world is like being crucified on an old rugged cross of perpetual annoyance.

Public discourse”if you can call it that”has devolved into a ghastly assembly line of vapidity, vanity, shaming, shamelessness, stunted thinking, and arrested emotional development. We are served up the same puke-worthy dish daily”a smarm casserole baked in snark, fricasseed in smugness, and sautÃ©ed in intellectual cowardice.

Sometimes I wish you all had one face so I could vomit on it.

I compiled a similar list last year, much of it comprised of the same sort of flickering nonentities that people this year’s list. The main difference with my approach this year is that I”ve decided to go a little more “populist,” to lower my gaze and punch downward, to forgo listing anyone remotely famous”thus there will be no mention of perennial high-profile annoyances such as Barack Obama, Eric Holder, Chris Hayes, Bill de Blasio, or Lena Dunham. I”ve skewered them all this year, and except for that brief mention in that last sentence, they deserve no more of my attention, and to be frank, I”m getting a bit of a headache even thinking about them right now.

I originally compiled a list of over 30 names, gradually winnowing it down to these 14 losers, none of whom I could imagine spending three minutes alone with in a room without wanting to floss my gums with fist-sized glass shards. You may notice there are only six men and eight women on this list, but that is only because women are highly skilled at being annoying.

This is a countdown, from least annoying to most annoying, even though they are all tremendously annoying. Go thy way, all of ye, and annoy me no more!

“Sometimes I wish you all had one face so I could vomit on it.”

14. Filippo Menczer
Unless half of your face was blown off in battle or you suffered such intensely scarring acne during adolescence that you could hide pocket change in your facial craters, no male face alive looks better with a beard. Yet to my extraordinary annoyance, beards have become the default fashion style for all modern male progressives, no matter how mincingly effeminate they are otherwise. Perhaps beards are only useful in that they allow the casual observer to distinguish between male and female progressives, because they all have boobs these days.

Indiana University’s Filippo Menczer has a beard. That’s strike one. As of a couple months ago, his personal webpage featured himself and his family depicted as characters from The Simpsons, an animated cartoon series that I”ve always found so supremely annoying that it makes me want to stab hamsters. That’s strike two.

Where Menczer strikes out completely is that he’s one of the go-to guys for a new database known as “Truthy,” which receives federal funding to monitor “hate speech” on Twitter. I suppose the very fact that I hate bearded government snitches who like The Simpsons may get me red-flagged on Truthy, but if I hid my annoyance with people such as him, it”d give me cancer faster than I could toast a Pop-Tart.

13. Ben Pitcher
Like Filippo Menczer and 99.874% of all modern male leftists, Ben Pitcher has a beard and glasses. And like the devil-hunting Orange County housewives who were always seeing hidden satanic messages on cereal boxes in the 1980s, Pitcher’s delusional X-ray vision allows him to see “fascism” in the most benign cultural expressions. This year he did an interview with BBC Radio 4 in which he claimed that the BBC program Gardeners’ Question Time “is layered with, saturated with, racial meanings.” No, I”m not kidding. Quite obviously his brain took root and blossomed in some decidedly fallow and shallow soil.

12. Tracy Van Slyke
Another British scribe who is paid to hallucinate racism where none exists, this whinging ginger minge-bucket penned a midsummer essay in The Guardian alleging that the harmless children’s animated show Thomas the Tank Engine was a burbling furnace of racism, sexism, homophobia, and anti-worker sentiments. The only thing that I could imagine would make her slightly less annoying would be if Thomas the Tank Engine were to flatten her in a locomotive mishap.

11. Greg Dyke
Yet another impenitent British ethnomasochist, Dyke also proved to be an ungrateful employee, referring to the BBC as “hideously white” while on the company’s payroll. While employed as chairman of the Football Association in July, this old, hideous white man referred to the FA as “overwhelmingly male [and] overwhelmingly white” and that it needed to start ethnically cleansing itself of “old white males.” Predictably, he did not offer himself as a sacrifice, because these types never do.

9. Mary Shomon
This is a woman with thyroid problems who appears to think that the “thyroid world“ has a problem with her because she’s a woman. She consistently depicts the field of endocrinology as a male-dominated snake pit of misogyny: “I regularly hear the term ‘crazy’ used in reference to thyroid patients, and myself.” The possibility that she’s crazy seems to have deftly eluded her consciousness.

8. Toni Christina Jenkins
What does it say about America that so few white people are calling black people “niggers” anymore that black people have to make it up to gain attention, money, and sympathy? Jenkins, a Red Lobster waitress in Tennessee, appears to have forged a receipt in which a takeout patron called her a “nigger” instead of leaving her a tip. Jenkins blasted a pic of the forgery on her Facebook page and allegedly received over $10,000 in sympathy donations. Even after a handwriting analyst concluded that her customer, a white male named Devin Barnes, had not written the “nigger” part of the receipt, Jenkins defensively claimed that “I was not trying to get back at him or bring any attention to him at all. I have nothing against him. I can only imagine what he is going through. I was trying to bring attention to racism.” Ms. Jenkins, even the lobsters are laughing at you now.