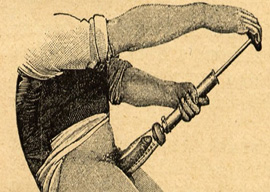 A penis pump is a cylinder that is fitted over the penis, with a manual or motorized pump to create suction. As the apparatus creates a partial vacuum around the penis, blood is drawn into the penis, helping it to become engorged.

Pumping must be done very carefully to avoid serious injury: over-enthusiastic pumping can burst blood vessels and form blisters. In some cases the testicles can be unexpectedly pulled into the cylinder, causing discomfort, pain, and possibly injury.

Quadriplegic millionaire pornographer Larry Flynt is apparently a fervent pumper. He boasts that squeezing his scrotally implanted device makes him “hard enough for a cat to scratch”—not the most pleasant metaphorical endorsement.

Men’s-rights types grouse that American females live longer than males. I can easily imagine the likes of Gloria Steinem shooting back that the very existence of a federal penis-pump program is proof that men are, in fact, living far too long. (So is the continued existence of quadriplegic millionaire pornographer Larry Flynt, come to think of it.)

If history is any guide, Fox’s scoop won’t deflate engorged government-entitlement programs. These exposés provide writers’ rooms with joke fodder, keeping cartoonists and columnists busy for a week or two. Meanwhile, the list of federal freebies gets longer and harder to trim. Outrage can occasionally prompt a flurry of remedial ass-covering such as last year’s belated move to prohibit convicted sex offenders from getting more free Viagra. But neither anger nor mockery has ever impaired government spending’s steady rise. Reality may have indeed rendered satire extinct, but was satire ever much practical use?

Consider every breathless exposé and corny joke and personal anecdote you’ve ever heard about the United States Postal Service’s inefficiency, then savor this:

In the 1960s, a stunning 83 percent of the agency’s total budget went to wages and benefits. Three decades later, after billions of dollars had been spent on automation, labor costs still accounted for 82 percent of the budget.

As far as we know, American citizens aren’t footing the bill for sex tourism like their British counterparts, who learned last year that a “man of 21 with learning disabilities has been granted taxpayers’ money to fly to Amsterdam and have sex with a prostitute.”

But don’t get your knickers in a twist, you lot. We’re assured by this fellow’s social worker that “He’s planning to do more than just have his end away—he’s having a holiday.” And anyhow, “He has been to two sexual health and sexual awareness courses and basically wants to try it.”
Give it time, though. The United States may be in the red, but any day now you’ll be underwriting vacations to red-light districts. A quarter of a billion dollars has already been swallowed up by mechanical fluffers. Can their flesh-and-blood equivalents be far behind? The White House will sell federally subsidized prostitution as a WPA-style project, then brag about getting the unemployment rate down. Who can possibly complain about any endeavor that gets Americans back to work—even if it’s doing “the job we call blow”?