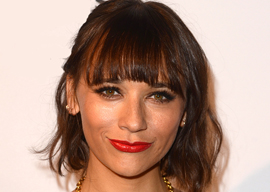 If at least one of your parents identified as black, then you are considered black. For example, Rep. G.K. Butterfield (D-NC) looks more like English philosopher G.K. Chesterton than he looks like, say, Kanye West, but that doesn’t matter under the American system. In fact, Butterfield was the chairman of the Congressional Black Caucus until January.

It would be interesting to see if anybody ever gets dropped from the ranks of African-American just because their ancestors kept marrying white people, as long as each person in the chain of descent identified as black. I’m not familiar with that ever happening.

For example, actress-writer Rashida Jones is not noticeably black by looks, but as the daughter of Quincy Jones (producer of Michael Jackson’s Thriller), she qualifies as black.

In the future there will no doubt be more individuals like Bel-Air-bred Rashida (although few will likely be as easy on the eyes). But there’s no evidence as of yet of any movement by blacks to reassess the one-drop rules. In contrast to Indians legally limited to a single casino, blacks are entitled to larger quotas as their numbers expand, so they have less incentive to limit membership to increase the size of each individual’s share of the pie.

There are some ambiguities in the system: The racial status of the descendants of an individual who “passed” for white is uncertain.

But this issue doesn’t come up much because even before the 1960s, few people went through the trouble of passing for white since it involved shedding all public ties with relatives who identified as black. Some ambitious people did that, but it was wrenchingly hard, so most who could have did not.

Another interesting concomitant of how African-Americans consider race to be significantly biological is how they will retrieve the memory of wayward part-blacks who passed for white and reclaim them as black. For example, New York man of letters Anatole Broyard was from a Louisiana Latin background with a different system of racial classification and chose not to identify as black. But after his death, African-American studies professor Henry Louis Gates went to great pains to declare that Broyard was a black man who had passed as white.

The unforgivable sin today is to pass as black. Netflix is currently running a documentary about Rachel Dolezal, who headed the Spokane NAACP before being unmasked by her white parents. The movie has elicited extremely angry reviews by black women writers. Dolezal was raised under unusual circumstances—her parents adopted black children and she came to identify racially with her brothers and sisters—that one might think might elicit a little sympathy. But she gets none.

My guess would be that it might be possible for the child of a parent who passed for white to retrieve his or her status as black. Perhaps even a grandchild could qualify as black, but probably not beyond that. If you are, say, 1/1,024th black and 1,023/1,024th white and your last ancestor who identified as sub-Saharan Africa was in the Cape Verde Islands in the 16th century, you are out of luck.

For example, when the Irish-looking Malone twins, Paul and Philip, took the civil service exam to become Boston firemen in 1975 as white men, they flunked. But the next year, their mother conveniently found an old photograph of what they said was their black great-great-grandmother (which would make them as black as Senator Warren is Indian).

When they took the test again in 1977, they once again failed to reach the score required of whites. But now they were registered as black, and therefore were hired. After ten years on the job, however, they were fired on the grounds that they didn’t look black, that their ancestors had identified as white on birth certificates for at least three generations, and that the community didn’t see them as black. Plus, it was pointed out, they might have just picked this old photo up off the floor at a fire scene.