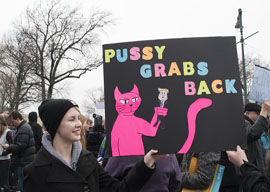 If you”re baffled by a women’s march that excluded thousands of women and was run by an extremist Muslim, well then you “literally just can”t even,” which is basically, like, WHATEVER! This was not a women’s march with any kind of logic behind it. It was an anti-women march, and women participated because they fell for a steaming-hot pile of platitudes. These useful idiots were duped by Islamist Linda Sarsour, who is determined to normalize her extremist culture. It was one of the stupidest marches in the history of modern politics, and it says a lot about where we are as a country. In short, we are a bunch of spoiled ingrates who are so desperate to complain, we will demand rights we already have.

I spent hours on Monday going through signs and trying to find just one salient point. If you take a step back, the only real thing all women have in common is this magical ability to create life. If they were carrying signs that said “We created everyone on earth,” I would say touchÃ© and wish them nothing but the best. They didn”t say that. In fact, to most of the women there, it was about the opposite of making babies. Abortion seemed to consume their agenda, which is baffling because women are evenly split on the abortion issue. A pro-choice society is denying the rights of the other half of women who want to live in a society that recognizes the procedure as murder. Even Sarsour, whose religion forbids abortion, forbade pro-lifers from coming to the event. This is a classic example of taqiya. It is in the best interests of jihad for her to temporarily betray her religion and pretend to be pro-choice.

“What the hell has all this Muslim propaganda got to do with women’s rights?”

These contradictions were actually the most rational the march got. The signs got way crazier. “My pussy grabs back” was a common theme. This is based on the fact that Trump thinks you can just grab a woman’s pussy now (he doesn”t) and that a vagina has fingers (equally absurd). Aren”t these women embarrassed by the fact that their entire political ethos is based on a throwaway conversation that took place on a bus eleven years ago? What was basically as relevant as a fart joke is what brings women to Washington to scream, “No, you may not grab my pussy!” Uh, I know. That’s why we made it illegal. I even saw young girls draped in pussy signs. What kind of parent adorns their daughter with a sign that says “This pussy bites back”? Other favorites included “When will you shithead men finally die?!!,” “Fuck you orange Hitler,” “Women are perfect,” “I hate Trump as much as I hate my bra,” and the presumptuous “He thinks I”m sexy and that I can be grabbed. Not my president.” This was a new form of protest I”m going to call “blind activism.” It’s when you go to a march based on nothing but feelz and have no idea why you”re there.

There was also a strange anti-white undertone to the whole thing. I saw a black woman with a sign that said “Don”t forget, white women voted for Trump” (above link). I also saw a white woman with that sign. She was recognizing the damage her fellow white women had done to the country and she was making a public apology. This is how it works with Islam. You start with white guilt, throw on a layer of diversity, and the next thing you know, a Muslim woman is a feminist icon and liberals have been hijacked by “Alt-ISIS.”

Women at the march adorned one another with hijabs. They even put one on a man. Shepard Fairey created the poster for the event, which featured a Muslim woman in an American-flag hijab (yeah, right). The woman in the graphic is tarted up like a whore, which is yet another Islamic contradiction. As Michael Malice recently said, “You can tell that the Koran does not advise you to wear the LancÃ´me counter on your face.” What the hell has all this Muslim propaganda got to do with women’s rights? Are they marching for the girl in Pakistan who was recently burned alive by her mother for shaming the family? Are they marching for this new trend of Muslim women in Nigeria using babies as bombs? Did they express concern about Muslim women being banned from looking up while crossing the road? How about the Yazidi girls sold as sex slaves while these women were marching? No, they were marching because they support all women, especially Muslim women, but not those who are pro-life, which is all Muslim women. What a shitshow.