The Barren Wombs of Smart Women 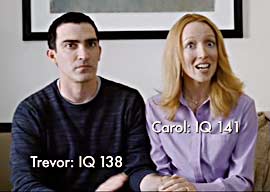 A statistical analysis from England suggests that a woman’s IQ is inversely proportional to her desire to breed. This, in turn, suggests that the world will grow dumber with every new day.

In his book The Intelligence Paradox, London School of Economics researcher Satoshi Kanazawa surveyed data from the United Kingdom’s National Child Development Study. Controlling for variables such as education and income, he reached the following conclusions:

“¢ With each increase of 15 IQ points, a woman’s urge to reproduce is diminished by 25%.

“¢ The average IQ of women who want children is 5.6 points lower than those who don’t want them.

“¢ Among all 45-year-old women in England, 20% are childless, but this figure rises to 43% among those with college degrees.

The paradox is that women who are measurably more intelligent based on IQ tests are dumber in terms of evolutionary survival instincts. Kanazawa writes:

If any value is deeply evolutionarily familiar, it is reproductive success. If any value is truly unnatural, if there is one thing that humans (and all other species in nature) are decisively not designed for, it is voluntary childlessness. All living organisms in nature, including humans, are evolutionarily designed to reproduce. Reproductive success is the ultimate end of all biological existence.

Kanazawa’s findings correlate with a 2010 Pew survey that found women ages 40-44 with a master’s degree or higher are 60% more likely to be childless than women who never graduated high school.

“Dumber people tend to invest as much thought into reproduction as they do to defecation.”

Kanazawa is widely known as a “controversial” researcher, which is coded speech meaning that his results cause significant discomfort among those who swallow the reigning cultural dogma. In the past he has faced disapprobation, ridicule, and even job dismissal for publishing studies that claim black women are less attractive than women of other races due to their higher testosterone levels, sub-Saharan Africa’s poverty is caused by low IQ, intelligent men are less likely to cheat on their partners, and attractive people are more likely to produce female offspring. He also wrote that if Ann Coulter had been president in 2001, she would have dropped nuclear bombs on the Middle East and won the War on Terror “without a single American life lost.”

But it is specifically his research on race and intelligence that causes his critics to dismissively snort that he is a zero-credibility genocidal wackjob who peddles junk science riddled with huge methodological flaws that raise the terrifying notion of eugenics that has long been debunked and discredited because of, well, Hitler and everything.

Paul Gilroy, a colleague of Kanazawa’s at the London School of Economics, says:

Kanazawa’s persistent provocations raise the issue of whether he can do his job effectively in a multi-ethnic, diverse and international institution.

His statistical findings do not jibe with our cultural dogma.

Despite all the jeers and catcalls, Kanazawa defends his research:

The only responsibility scientists have is to the truth. Scientists are not responsible for the potential or actual consequences of the knowledge they create.

The most egregious blasphemy one can utter in today’s insanely stifling and repressive climate of intolerant egalitotalitarianism is to gently suggest that genetics play any role in determining intelligence differences and relative prosperity between individuals and social groups.

Yet (grab a hankie) that’s what the evidence suggests.