The Bashing of Joe Paterno 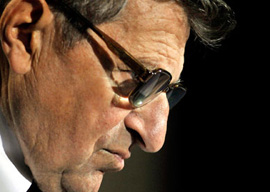 Rich Lowry ululated about “the enduring shame” that the fallen “demigod” had caused his university. One particularly bothersome attack on Paterno came from the normally agreeable Rod Dreher, who proposed that “the university should return the JoePa statue but install next to it a millstone on a pedestal.” This refers to Christ’s teaching that it is better “to be thrown into the sea” than to “cause one of these little ones to sin.” Although Joe should have done more to keep his nutcase friend out of the showers, I”m not sure he caused “little ones to sin.”

This hatred against Paterno has a political side which we in Pennsylvania have recognized for years. The left profoundly hated Paterno, although blacks, who made up a large part of his teams, generally seem to have revered him. Paterno was a Republican and his son Scott a Republican candidate who lost a 2004 race for Congress.

Somehow it is only an “enduring shame” when a traditional family head tries to minimize the damage he might cause a morally weak friend. Then his statue must be melted down and any contact with his memory may cause ritual pollution.

Most Paterno-haters seem be indifferent to or defensive of leftist lowlifes” vices. Although Teddy Kennedy killed his (probably pregnant) girlfriend in a drunken car accident, his penalty was a two-month suspended jail sentence and a temporary license suspension. I didn”t notice Lowry demanding that Teddy’s plaques in Massachusetts be tossed into the junk heap when this widely celebrated “lion of liberalism” died.

A few months ago, members of Congress honored gay activist Barney Frank as he retired to marry his gay lover. Few commentators had the guts to bring up the fact that in 1989 it was discovered that Frank had hired a male prostitute for sex who subsequently ran a prostitution ring out of Frank’s apartment.

But criticizing gay activists who commit illegal acts or noticing Teddy Kennedy’s criminal conduct is not likely to win applause in the mainstream media. It is more profitable to attack a dead, old-fashioned ethnic Catholic who went too far in shielding a family friend.

This too may change if the left suddenly decides that man-boy coupling is an “alternative lifestyle” that deserves legal protection. At that point Sandusky would be viewed as a martyr. Stranger things happen every day.