The Brazil of North America 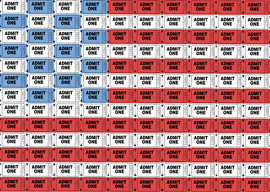 Disintegration, separatism and secessionism, for racial, religious, and cultural causes, are a phenomenon common now to Europe, Africa, the Middle East and Asia. Are we somehow immune?

The world is boiling with racial, tribal, cultural and moral conflict. People carry in their hearts the seeds of these conflicts. The notion that they will come here and be converted into Ozzie-and-Harriet Americans may be a bit utopian.

America is becoming a microcosm of a world on fire.

Why are we doing this? Why are we inviting the world into the USA? Was there some grievous flaw in the America of Ike and JFK that must be expunged? Some sin for which we must do penance?

What is coming is predictable, and has been predicted.

By 2042, Americans of European ancestry will be a minority in a country built by Europeans. “Anglos” are now a minority in California, New Mexico and Texas. Hispanics will soon be the majority in all four border states with Mexico.

And should Hispanics decide not to give their electoral votes to any presidential candidate who does not promise to erase the border with Latin America, that would mean the end of the United States as we know it.

Americans are already deep in a culture war over morality—marijuana, abortion, same-sex marriage. We are already racially polarized over affirmative action and income inequality.

And when we have ceased to be an English-speaking, Christian country and become instead an Asian-Hispanic-African-American-white nation, with large Jewish, Christian, Muslim, Hindu, Buddhist, agnostic and atheist minorities, and no defined borders, or common faith and culture, what holds us together?

And when did we vote for this future?