The Breakdown on Bitcoin 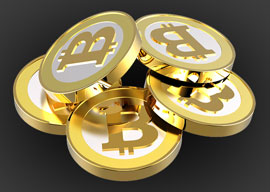 As predicted in recent weeks in this column, those holding the bitcoin currency have seen their coin rise in value to a high of $195.8 from around $130 early in the month. As of October 19, the closing price of bitcoin was $183.2″up 40% in a fortnight from the time of the closure of Silk Road, the illegal cybermarket known as “the eBay of drugs.”

Some have attributed the currency’s recent flourishing to the US government shutdown. Others, such as the Winklevoss twins, take a long-range view, allowing for the possibility that an awkward new species of currency will become socialized and grow into a full-fledged member of financial society, a regular financial tool available to all. It already is, in some circles more than others.

As we saw occurring during the Cyprus crisis earlier this year, with the threat of withdrawals from citizen savings accounts most likely being the force behind a surge in the virtual currency’s interest, “some believe the current uncertainty in the conventional system is fueling bitcoin’s recent rise even though the ecosystem has yet to find its ‘killer app’,” according to VICE.com. The Cyprus surmise has not been proven empirically, but the utility of bitcoin as the only possible means of capital flight or exchange from a country where capital controls are strictly in place was highlighted. With bank accounts and financial transactions frozen, and smuggling as carefully watched for as any World War II border, short of swallowing euro and swimming to another country, buying bitcoin was the smartest way to get your money”even to save your fortune.

“Are aliens superior or just different? The same question can be asked of bitcoin.”

The same may be true of the recent governmental paralysis in favor of the bitcoin. Just as traveling with bitcoin while he passes through five different currency zones will relieve a traveler from five currency exchange fees and commissions, bitcoin will also obviate the risk of having to buy currency at an unfortunate moment”such as when his country’s government shuts down”and so suffer a poorer exchange rate purely as a consequence of his elected politicians’ screw-ups. Bitcoin is, after all, accepted worldwide. It is the new AmEx platinum card. Every canny operator holds it, and its use in emergencies is beyond doubt. This isn”t to say that bitcoin is a stable currency. Not at all.

“The more stupid things governments do, the more attractive bitcoin becomes,” VICE quoted Roger Ver, the director of Business Development at BitInstant, as saying. Ver is a thoroughgoing bitcoin evangelist. This is what he thinks: “Bitcoin’s strengths come from its nature. Governments can’t inflate it or seize it at will.” Ver sees a rosy future for bitcoin ahead due partly to the ever-growing expansion of the online black markets and also the quasi-legal grey market”i.e., people who may find it useful to hold bitcoin as opposed to dollars at certain moments (such as when the taxman comes knocking).

How cool: You can make a million dollars disappear for two weeks and reappear at $1.4 million, and you need no one’s permission to do so. It’s up to you to figure out how to declare this capital gain. It’s a nice problem to have if you care enough about your country to declare your gains at all. Otherwise, it’s as simple as apple pie.

Such maneuverings threaten the legitimacy of the currency as much as regaining for cyber citizens a freedom over their financial affairs that some feel the big banksters may have taken away. Now that the government insists banks are safer, holding much higher capital-risk ratios as they do, the cost of this extra capital is being passed along to the consumer”the very same person who felt duped in 2008 and probably was in some way. Thanks for nothing”again.

The more stupid things governments do, the more attractive bitcoin becomes….Bitcoin’s strengths come from its nature. Governments can’t inflate it or seize it at will….Bitcoin will continue to gain more and more popularity around the world as people quickly figure out that it is superior to government issued money.

Superior or not, it is far less of a headache. Are aliens superior or just different? The same question can be asked of bitcoin, and we should remember our manners and invite the new, unfriended alien in town into our houses to join the cocktail party. The more people our alien friend meets, the better for everybody.

Regulation of some sort will apply, especially if bitcoin becomes a nation’s currency, as the Winklevoss investors have opined. And now we know what the Winklevii knew in advance when they set up the ETF for trading bitcoin: This alien coin is basically kosher.

To gain an insight into their vision, I took a closer look at the Winklevoss Bitcoin Trust’s SEC Registration Statement (Form S-1), which reveals that the twins registered 1,000,000 shares with a proposed maximum aggregate offering price of $20,090,000.00. Included in the statement is the intention that “each delivery or transfer of bitcoins by the Trust to pay the Sponsor’s Fee or other expenses will be a taxable event to Shareholders.” That’s the tax issue dealt with, and its no small thing. In so doing, the Winklevii have made bitcoin trading legal for now at both a micro (shareholder) and, consequently, macro (shareholding) level. They’ve given us the opportunity to buy this stuff without worrying about Uncle Sam knocking down the door. This simple registration of a nebulous “currency” in the form of exchange-tradable shares is their piÃ¨ce de rÃ©sistance.