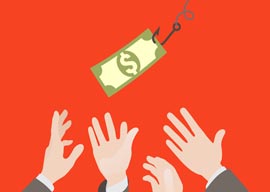 Thus, the best interludes are when the smart guys take two road trips to the Sand States to meet us dumb Americans. In one, several stars go to a convention in Las Vegas to learn if the mortgage industry is stocked by geniuses who have figured out some new kind of math. In case you are wondering: It’s not. (The Big Short could have used more scenes of overconfident sales dudes. Indeed, the film would be better if there were a big role perfect for that living embodiment of Bush-era cluelessness, Will Ferrell.)

And, in a sequence reminiscent of my 2008 short story “Unreal Estate,” Carell’s boys visit an exurban housing development outside Miami to see if the Housing Bubble is as dubious in plasterboard as it seems on paper. A brand-new McMansion turns out to be home to a tattooed mixed-race renter. The implication is presumably that no greater fool will come along to pay $600,000 to live next to a tow-truck driver, but McKay, an irate but timid Bernie Sanders fan, wimps out at making this clear. (Lewis, a protÃ©gÃ© of Tom Wolfe, appears to be a closeted conservative, but I doubt if McKay has noticed.)

In reality, the essential cause of the Housing Bubble in what Lewis dubbed the Sand States“Florida, California, Arizona, and Nevada”was that the quantity of population was climbing fast enough due to Third World immigration to seemingly rationalize the higher prices, but the quality of the increasingly diverse population was declining. But under the rules of political correctness, nobody was allowed to articulate this in public. Instead, George W. Bush lectured his federal regulators that the real problems with the mortgage market were instead that racist rules about down payments and income documentation were redlining minorities out of their American Dreams.

In Bakersfield, California, a Mexican strawberry picker with an income of $14,000 and no English was lent every penny he needed to buy a house for $720,000…. Eisman [Carell] knew some of these people. One day, his housekeeper, a South American woman, told him that she was planning to buy a townhouse in Queens. “The price was absurd, and they were giving her a low-down-payment option-ARM,” says Eisman, who talked her into taking out a conventional fixed-rate mortgage. Next, the baby nurse he”d hired back in 1997 to take care of his newborn twin daughters phoned him. “She was this lovely woman from Jamaica,” he says. “One day she calls me and says she and her sister own five townhouses in Queens.”

But you won”t see any of that in McKay’s movie version.

Therefore, after all these years, McKay remains unsure whether the mortgage meltdown was due to fraud or stupidity. But Occam’s razor suggests that long-term ignorance and deceit is caused by taboo: Our most sacred value today is diversity, so that was the one cause we weren”t allowed to question.