The Church of Chick 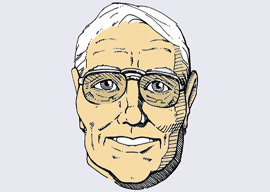 While Chick’s biggest ax to grind was with the Roman Catholic Church, which, in no less than 20 pamphlets, he places behind everything from Mormonism to fascism, his biggest accomplishment might be as the John the Baptist of satanic panic. A number of his works detail a vast underground occult conspiracy of human sacrifice. Dark Dungeons, from 1984, was made into a short film in 2014, showing how the Dark Prince uses Dungeons & Dragons to recruit foot soldiers for his vast satanic conspiracy. Jack Chick pioneered the use of these tropes long before they entered mainstream consciousness.

In the final analysis, Chick was a savant. His prescience regarding the gay rights movement, Islam, and satanic panic is easy to miss when studying his work, because there’s just so much camp and compelling plot to distract. More than that, the man was able to create a cottage industry”and, to some extent, a cult of personality”with little more than a handful of bizarre beliefs, a little talent, and sheer force of will.

Jack Chick was doing what every blogger in the world wishes they could do, 50 years ago and with way fewer resources. He’s a template for any madman who ever had a strange idea and decided to turn it into a cottage industry. He will be sorely missed.