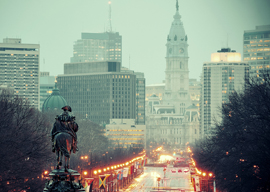 I just flew back from Philadelphia and boy, are my arms tired of shooing away homeless people. The city of brotherly love has been overrun with broke bruthas asking for some love and it’s so depressing, you tend to forget the incredibly rich history of the place. While we waited for a walking tour to begin a vacuous black man stared at us nonstop as he stuffed potato chips in his face and rode a parked Citibike backwards (they”re called Indego bikes there). His jacket must have been prison-issued because it said “State Property” on the back. Moments later, as we walked toward the sightseeing tour bus, we literally had to step over another black bum who had passed out next to his dinner on the street. The woman running the service pitched us like he wasn”t there. I asked if he was included in the tour and she said, “Oh, we can”t do anything about him.” This was the attitude of the place: The homeless are here to stay, move on. When Ben Franklin said, “Having been poor is no shame, but being ashamed of it is,” he had no idea how shameless 2016 would be.

“Sorry, but your liberty doesn”t include the freedom to fondle yourself in front of my kids.”

Back in New York, we are having a homeless zenith thanks to a pothead socialist mayor, but there’s still a sense of order to it all. The beggars keep to certain areas and politely ask you for change before being told by cops to move along. In Philly, the “home-deprived” (as Taleeb Starkes calls them) walk around like they run the place. While walking back from the Liberty Bell, I saw about a dozen drunk losers dancing and sleeping on a street corner like it was a 17th-century jail cell. They had a boom box playing R&B and it created a sort of homeless nightclub where they could all party together, vomit, and urinate. It was striking because we also visited the now-defunct Eastern State Penitentiary, where the whole idea of prison as penitence was created. On the tour, they showed us what prison was like before Eastern State and it was just a room where louts were locked away from society. They got drunk and preyed on one another and nobody cared. It wasn”t about rehabilitation back then. It was about getting them away from us. Then we came up with the idea of fixing criminals. Somewhere along the way, however, the original idea crept back”only, the lout room isn”t locked away from society. It is society. Though this human garbage was about 90% black, there was also plenty of white trash roaming the streets of Philly. When we visited the beautiful Rittenhouse Square (conceived by William Penn himself in the late 17th century) on the way to the MÃ¼tter Museum, there was a white crackhead screaming Rage Against the Machine’s “Killing in the Name” to employed people on their lunch break. The song can be hard on the ears in context, but when the lyrics are screamed at you without music, all you hear is a red-faced wigger shouting, “Fuck you! I won”t do what you tell me!” at the top of his lungs. Nobody was telling him to do anything.

This is the city where America was created. The Liberty Bell was forged 24 years before Independence. I wondered if seeing the word “liberty” on it got some Americans thinking about the Brits who made the bell and were forging America’s destiny. The Yankees thought, “Fuck you! I won”t do what you tell me,” and created the Declaration of Independence. It’s an incredible story, but liberty has its limits. When we got back to the hotel, the bum we stepped over was still there. I know he wasn”t dead because he had a different hand down his pants. Sorry, but your liberty doesn”t include the freedom to fondle yourself in front of my kids.

I last visited Philly as an unmarried man and was impressed by the way they handled racism. They seemed totally over it the way Southern cities like Charleston, S.C., are. We went to see Andrew W.K. there in 2001 and saw almost as many black hipsters as white ones. Where New York is consumed with racial inequality, the Philly of 15 years ago had apparently agreed to live and let live. This last trip, however, was like listening to Dinosaur Jr.’s You”re Living All Over Me. Being down with the brown now means letting browns do whatever the hell they want even if it’s at your expense.