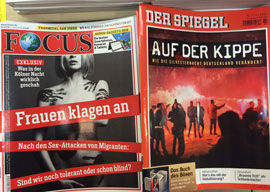 “What happens on the right-wing platforms and in chat rooms is at least as awful as the acts of those assaulting the women. This is poisoning the climate of our society.”

It’s pretty clear that the German political class is more scared of Germans than they are of Arabs.

All sorts of reasonable political opinions are no doubt being censored everywhere. An English barrister friend of mine, of unimpeachable respectability, got into trouble with Twitter for referring to “Muslim rape gangs.” Many other people say nothing on social media for fear of being informed on by their friends.

The police, unprepared on New Year’s Eve, were ready with water cannons to fire at PEGIDA when they protested about what had happened. And yet despite all this, hope creeps into my breast by degrees.

Despite it all, this crisis has shown us that freedom of speech and freedom of thought are not dead yet in Europe. They (the establishment, the cross-party liberal consensus, call it what you will) are not all-powerful.

Can Germany summon up the courage to recognize how naive they were, to see that no more migrants should be admitted, and to discard Angela Merkel?