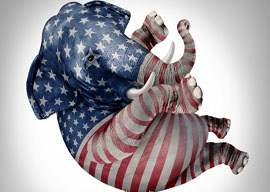 However the Trump War resolves itself, we”ve already seen at least one casualty”conservative media cohesion. Sides are being drawn, and blood feuds have been declared. As The New York Times recently pointed out, Trump-inspired divisions and conflicts among normally allied conservative media personalities are growing at an alarming rate, and staying neutral is practically impossible. A recent Guardian piece (for which I was interviewed) about the Hollywood conservative “oasis” Friends of Abe paints a portrait of a “slow-motion civil war” in which members are at each other’s throats over Trump. Friends of Abe used to be a place where everyone could hang out and get along: the Breitbart people, the National Review people, the RedState folks, the Horowitz clan. At any given past event, you might have seen Ben Shapiro doffing his yarmulke to Ann Coulter, Roger Simon clinking glasses with S.E. Cupp, and Bill Whittle and David Horowitz passed out together in a corner after forgetting to breathe while monologuing at each other.

Such unity! What the hell went wrong? Is it just Trump? Well, yes, in that the Trump candidacy put the hot needle to the zit. But the puss had been building up for some time, and there are many reasons why.

Look at the Lewandowski/Fields affair and the ensuing Breitbart.com crack-up. Everyone involved is unlikable. There are absolutely no heroes in that debacle. Michelle Fields is a whining millennial drama queen who claimed”with a straight face”that Lewandowski’s arm tug was the worst thing that happened to her since her father’s death. This is why the “old media,” corrupt and biased as it is, still commands respect. When old-school reporters like Sam Donaldson were arm-touched, they responded by simply telling the unwanted toucher, “Get your hands off me.” They understood that the occasional arm touch was a hazard that comes with the job. They didn”t respond to unwanted contact by calling a press conference and going on an “I”ve been victimized” media junket.

“Fragmentation, hostility, and side-taking will continue until the Trump coronation or the Trump Waterloo, and there”ll be no returning to normal afterward.”

And Ben Shapiro? Oh, what a self-righteous dog-and-pony show that sawed-off unibrow performed following Fields” “bad touch.” I was surprised the little man didn”t finalize his Breitbart departure by performing kriah, the Hebrew garment-rending that signifies “You”re dead to me” (my guess is, he’s too cheap to waste a good shirt). If Shapiro was so troubled by Lewandowski’s tug, I”m curious why he was totally fine when Breitbart’s own Milo Yiannopoulos defended and championed the beating of Jezebel editor Erin Gloria Ryan, declaring, “I can”t imagine why anyone would want to punch her in the face. Well, actually, I can,” adding that the assailant did “the job every man in America wishes he could.”

Shapiro was editor at large of Breitbart.com at the time Yiannopoulos made that statement in a piece posted on the site, and he was totally cool with it. No angry pressers, no job-quitting hissy fit. Tugging a female reporter’s arm is an unpardonable sin, but cheering the ruthless beating of a female reporter is fine. That’s some nice Old Testament ethics there, Benny. How very Deuteronomous of you.

But if Fields and Shapiro are bad actors in this freak show, what can be said of Patrick Howley, the Breitbart.com reporter who initially doubted Fields” story? Howley, it turns out, is also a master at faking events and making himself the center of a story. Frankly, his record puts Fields” to shame. In October 2011, Howley “infiltrated” a Washington, D.C., Occupy group in order to provoke a clash with security guards by gate-crashing the Smithsonian’s National Air and Space Museum while pretending to be one of the Occupy protesters.

I had the honor of witnessing firsthand Howley’s unethical behavior when he contacted me in late 2014 regarding a “scoop” he thought he had about Bill Clinton and me. Howley, then at the Daily Caller, had previously misattributed a quote in an earlier piece involving a Democrat congresswoman who”d written me a fan letter (such is the surreal nature of my life that fan letters I receive become headline news). After refusing to correct the quote, he got in touch with me about the Clinton story, which (purportedly) involved me, the former president, and country-rock singer Julia Garlington, who used to open for Blake Shelton before, shall we say, “falling on hard times.”

Even in the face of my warning that the Cole/Clinton story was bogus (which it was), Howley went ahead with it anyway. To be fair, I let it happen, because these days I have zero tolerance for two things: misattributed or fake quotes, and death threats. Howley, having perpetrated the former, was solidly on my “do not resuscitate” list when I saw him hanging himself with his own rope. The result was much hilarity in the form of a public pantsing of Howley (by sites like AlterNet, TPM, and Media Matters) that I hope hastened his departure from the DC (although, amazingly, the discredited Clinton/Cole story is still up, with no update or correction).

Howley is no better than Fields and Shapiro.

And the (remaining) Breitbart editors are miscreants too. It’s an open secret among conservative bloggers that, following Andrew’s death, the site began ripping off other writers left and right (well, just right). It’s happened to every blogger I know. Last summer, when I found one of my Taki’s pieces reworded and posted on Breitbart.com without attribution, I contacted the woman who “wrote” it, Cassi Pollock, a journalism student at UT Austin. She told me that the Breitbart editors routinely send her the work of professional writers for her to paraphrase and repost without mentioning the source. Apparently, Breitbart.com has a network of naive college students who do this work free of charge just for the credit.

My point is, you look at the Lewandowski/Fields dustup, and you see no heroes (including Lewandowski, who totally lied about touching the arm, because why explain the explicable when you can deny the factual?). Everyone in the story is a villain. Andrew Breitbart, all his faults aside, used to act as a moral center in the conservative media universe. That world no longer has anyone high-profile who commands the kind of respect he did. Standards are being lowered, and everyone’s bad intentions and biases are showing.

Which brings us to the biggest reason for the conservative media meltdown”the rise of the alt-right. In the wake of an interesting game of “dueling blog posts” between the aforementioned Yiannopoulos and Cathy Young at The Federalist over the correct definition of “alt-right,” I was recently asked by a neocon journalist for my definition. I told him, “The alt-right is basically made up of people who are willing to say the kind of things about blacks and Hispanics that you”ll only allow said about Muslims.” See, when it comes to Muslims, the “respectable” neocon press has, since at least 9/11, allowed all manner of line crossing. The “Muzzies” are primitive, ignorant goat-buggerers worthy only of being on the other side of walls, the business end of guns, and the receiving end of bombs. You earn your neocon bones by being uncompromising in attitude and language regarding the “Muslim problem.”