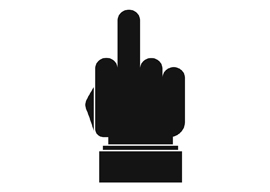 As one of the very few writers whose work resulted in a government-sponsored attempt at censorship, I can say quite confidently that the government is no longer the biggest threat to free expression in America.

One of my countless gripes about the grotesquely empty public display of sneering moral condescension that is the modern left is their continued posturing that they are fighting the power rather than representing it, consciously or otherwise. Conveniently ignoring the legions of discrimination lawyers, human-resources hall monitors, and corporate-diversity rectal inspectors, modern progressives are somehow able to maintain the delusion that “corporations” are by definition right-wing entities.

Of course they are. That must be why Google canned James Damore for daring to suggest the world’s largest company was hopelessly biased in favor of leftists. It also must be why it seems that the only people getting banned from social media or fired from their jobs based on nothing more than their opinions are those who are critical of the left.

I’ve speculated that the left seized the dominant cultural power to destroy someone’s life based merely on their beliefs during some murky point in the mid-1970s when Secretary of Agriculture Earl Butz was fired after making a joke about how blacks only want loose shoes, tight pussy, and a warm place to shit. In an American culture that had previously been more conservative, Butz would have been ostracized for talking about vaginas and defecation in the same sentence, but that sort of crassness was no longer the sin—now the transgression was to speak irreverently about blacks.

“The government is no longer the biggest threat to free expression in America. It’s the corporations.”

As the left has gradually accrued power it has grown proportionally more censorious. Donald Trump’s unexpected sucker-punch to the entire ideological and political spectrum only led the leftist thought police to more aggressively hunt and antagonize those they wished to silence. After Trump’s election, even relatively harmless clowns such as Milo Yiannopoulos found themselves banned from Twitter and the subject of full-blown riots from brain-dead neo-Maoist fanatics who refuse to accept honest debate because they wouldn’t last five minutes in an honest debate.

And then came Charlottesville and the slaughtered sacred cow the blindly leftist media had been seeking all these years.

If you’ll notice—they haven’t quite made noticing a crime yet—this same media weren’t nearly as shrill about the fact that an alleged Black Lives Matter supporter blew away five cops in Dallas in 2016. This was after BLM-inspired rioting and beatings across the country that were based on dubious half-truths peddled by the same media about a series of incidents that turned out to be much more complicated once the facts slowly leaked out. Hands up, don’t shoot? He was just buying Skittles? He couldn’t breathe, even though he was able to say he couldn’t breathe eleven times? Assigning guilt is a slippery and often slimy business, but one might plausibly argue that the way the mainstream media has purposely sculpted sensational racial narratives has in some way led to, or at least enabled, acts of violence and even murder.

Despite—or maybe even because of—all that, corporate media stand firmly and proudly behind groups such as Black Lives Matter.

Yet after one morbidly obese female protester who was blocking a public street amid rampant leftist street violence and whose own mother says she died of a heart attack passed into the afterlife, the tech world immediately and ruthlessly clamped down on anything they felt comfortable classifying as “hateful.”

First they came for The Daily Stormer. Make sure that link works. Check back in a month to see whether it works. Before Charlottesville, it was dailystormer.com, one of the most highly trafficked of all Alt-Right websites. The day after the aborted Unite the Right rally in Charlottesville, the Stormer ran a headline calling Heather Heyer a “Fat, Childless 32-Year-Old Slut.” Heyer instantly became a leftist martyr after it was widely reported that she was purposely hit and killed by James Fields’s Dodge Challenger, although the evidence I’ve seen leads me to believe that this framing of the event will be proved in court to be untrue.

Almost instantly, the Stormer’s domain was yanked. It then hopped to a Russian domain. And then an Albanian one. And then another. And another, getting stamped out with each new safe space it found. It seems to have gone through at least ten domain changes since August. If one were remotely skeptical whether Zionists are powerful, they are free to explain how they could get the Daily Stormer banned in country after country across the globe.

What makes the Stormer especially dangerous to the powers that be is not only is it gleefully anti-Semitic, it commits the unpardonable sin of being funny. Yes, I realize that many of you have been brainwashed and browbeaten into thinking it’s impossible for Nazis to be funny, but I very respectfully disagree. Beliefs are irrelevant, because being funny depends solely on whether the person in question is…you know…funny. But to maintain The Narrative, it’s much safer to have Nazis who are rabid and bitter. If they get the kids laughing at the Holocaust, we got a biiiiig problem on our hands.

Unlike Andrew Anglin and the Daily Stormer, Jared Taylor and American Renaissance are neither funny nor anti-Semitic. His major transgression is that not only is he painfully polite, he is also painfully informed and painfully accurate. So when Twitter launched its first big organized purge in December, Taylor was one of the first scalps they claimed. His very calmly argued video on racial differences in IQ the first that YouTube essentially neutered by placing it in a limbo where it is not only demonetized, its comments are disabled and it doesn’t appear in searches.

Until Charlottesville, the anti-immigration site VDARE.com, which hosts best-selling authors such as Pat Buchanan and Ann Coulter and is thus hardly some fringe site, was supported almost entirely by readers’ PayPal donations. Even though VDARE had nothing to do with the events in Charlottesville, and even though it’s never used the word “nigger” nor encouraged violence, PayPal canceled VDARE’s account a mere three days after Charlottesville.

Patreon.com is the premier site for online content producers who seek to crowdfund their projects. But like almost all social media sites, Patreon has vague prohibitions against phantoms such as “sexism” and “hate,” and it has banned relatively tepid Alt-Lite personalities such as Lauren Southern from its services. As an alternative to such institutional deplatforming, former Chief Technical Officer of Business Insider Pax Dickinson announced plans for a startup called CounterFund which would allow crowdfunding for content deemed beyond the political pale. But after Charlottesville, Dickinson was unable to find financial agencies willing to process payments for the site, so the project was shelved. Same thing happened to Patreon alternative Hatreon, which has currently suspended pledging for similar reasons.