The Crucifixion of Donald Sterling 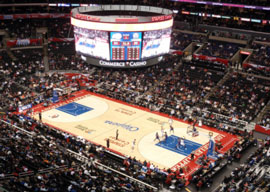 Like the late Christopher Hitchens, who only discovered his Jewish roots once he had moved to New York in the late Seventies, Donald Sterling has also had a revelation and is advertising the fact that he’s a Jew. For any of you who might not be aware who Sterling is, he was born Tokowitz 81 years ago but changed his name to Sterling to sound ritzier. He is a slum landlord who evicts poor women and orphans, began his career selling secondhand furniture to blacks and Hispanics, is as disgusting a man as you hope never to meet, and is since a week ago the most reviled man in America. His crime: He told a black girlfriend with a long rap sheet who insists the relationship is platonic—though she’s the alleged recipient of 1.8 million or more big ones from Sterling—not to bring black people to L.A. Clippers basketball games, a team he owns, or rather owned. She illegally taped him and seems to have sold the goods after he refused to meet her price.

“When it comes to race, the Hollywood sharks may lack talent but make up for it in PC.”

Since the storm broke Sterling has revealed his Jewish roots, hoping that Hollywood’s Jewish mafia will come to his aid. No dice. When it comes to race, the Hollywood sharks may lack talent but make up for it in PC. They know the crap they put out about zombies and science fiction and child abusing priests and Nazi southern folk is mostly watched by black men 25 and under, so the last thing they wish to do is alienate a group that one-third of will end up in jail sooner rather than later. What is shocking is that not a single voice has dared point out that Donald Sterling has not had his day in court and has been railroaded by the media in cahoots with race hustlers and other busybodies. By forcing him to sell the team he owns and imposing a 2.5 million dollar fine, the NBA has not only acted illegally, it has also acted unconstitutionally. The First Amendment guarantees the right to free speech. Sterling may be a rich slob but he didn’t use the N-word, and went as far as to encourage the black female hustler to “Admire him, bring him here, feed him, f— him, but don’t put Magic [Johnson, an NBA ex-superstar] on an Instagram for the world to have to see so they have to call me. And don’t bring him to my games.” Pretty tame stuff, I’d say, especially when compared to the hate that rappers spew out against whites and women. My God, I’ve said so much worse in the privacy of my house, but under the new rules of PC I’d get life without parole on Devil’s Island. What in hell is going on here? How dare anyone call America and Europe free when one can lose a business over something one says to some woman in private?