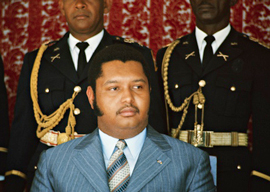 The late Jean-Claude Duvalier, better known as Baby Doc, played only a small part in my life. I arrived in Haiti for the first time two years after his downfall, during the presidency of the eminently respectable academic, Leslie Manigat, who was soon to be removed by army coup. The pudgy bovine face of Baby Doc still adorned the worn and grubby banknotes in circulation, and I could not help but feel a certain personal sympathy for so eminently unintelligent and naturally undistinguished a person, thrust into a prominence and power he never sought, and actually wanted to avoid.

It cannot have been easy to be president for life from the age of 19, especially since he had a bossy mother, sister, and wife, all of whom plotted and intrigued for power. And if I had been in his shoes at that age, I think”being more intelligent than Baby Doc and therefore having my head more stuffed with adolescent nonsense”I should have been far worse even than he.

“If anything, the stupidity of the bright and well-educated is the worst, because the most self-confident.”

At the time in the streets of Port-au-Prince you could buy from ambulant sellers a strip cartoon book of Baby Doc’s life, recounted in absurdly heroic and laudatory terms, that has since become a collector’s item. It had been produced in France just before his downfall, since which time demand for it had understandably disappeared. It was the work of a committee that called itself the Action Jean-Claudiste, and the book was published to coincide with a bogus election that never took place because of Jean-Claude’s removal from power. I suppose that, for there to have been Jean-Claudistes there must have been a Jean-Claudisme, but I never discovered at the time what it was, apart from pillage.

I learned from the book that there was a company in Paris that specialized in strip-cartoon propaganda on behalf of dictators. It was called ABC Groupe MÃ©dia International, and it had published such propaganda on behalf of Siaka Stevens”the first dictator of Sierra Leone, from whose rule the country has never since recovered”and El Hadj Omar (formerly Albert-Bernard) Bongo of Gabon, father of the present president, and ruler and looter for 41 years. When I was in Paris one day, I visited the company’s headquarters, which, if I remember correctly, were in the rue du Cherche-Midi. Suffice it to say that they were not pleased to see me there, and said that since the publication of these immortal works the company had changed its business model.

Bizarre dictators have since gone a bit out of fashion, if not disappeared completely. They were, of course, very good for Latin American literature, which would hardly have known what to do without them; the dictators we have today, if any, are dull by comparison. When a television production company asked me 20 years ago whether I had any ideas for programs, I suggested interviews with those few bizarre dictators who were still living in exile around the world, but many of whom would soon be dead. It seemed to me that they should be caught on film for posterity, and the production company took up my idea enthusiastically.