The End of Manned Space Flight 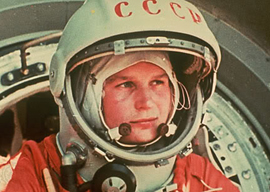 I don’t believe it. The International Space Station exists for no other purpose than to give the shuttle something to do. It will now have to be supplied by the Russians.

But Russia has no economy. Their state survives by extracting stuff from the ground, work which has natural finite limits”ask a British coal miner. They face dire demographic and geostrategic problems. Manned space flight is a luxury item even for healthy, successful nations. Russia’s program has no future. Their shuttle program was even more of a comprehensive flop than ours.

China is treading the imperial-grandeur track; but it’s a circular track, as Egypt’s pyramid-builders”and China’s own eunuch admiral“discovered. China’s natural condition is uncreative slumber in opium dreams of cultural solipsism, and that condition will soon be resumed as water finds its level.

Our manned-space entrepreneurs may get some business going with wealthy tourists curious to sample weightlessness, but if there is any other commercial point to putting human beings into space, I have yet to hear about it.

And whether or not there is any sensible reason to put human beings into orbit, we no longer have the capability. Western civilization”the only civilization ever to attain the levels of confidence, imagination, and creativity that are necessary for manned space endeavors”is manifestly in decline. Civilizations have their inevitable life cycles just as individuals do. Bruce Charlton has nailed it:

“Of course, the standard line is that humans stopped going to the moon only because we no longer wanted to go to the moon, or could not afford to, or something…”but I am suggesting that all this is BS, merely excuses for not doing something which we cannot do.

“It is as if an eighty year old ex-professional-cyclist was to claim that the reason he had stopped competing in the Tour de France was that he had now had found better ways to spend his time and money. It may be true; but [it] does not disguise the fact that an 80 year old could not compete in international cycling races even if he wanted to….

“It was around the 1970s that the human spirit began to be overwhelmed by bureaucracy….”

Reading that, who does not recognize its truth? Western Civ is a busted flush. Our own intellectual classes, the “conservatives” just as much as the liberals, hate it”hate their own ancestors. Show them a picture of the Apollo 11 mission control room in 1969 and see them blush, frown, cringe, and turn away in disgust and shame. Yet Western Civ is the only one that counts, other than for poetry, religion, and the decorative arts. When we enter a period of decline, nothing much will happen elsewhere.

If the human race survives the present century”a doubtful thing in itself“it will be as a squalid, degraded species of moral and intellectual midgets. Manned space travel was a last brave flourish of human capability before the darkness falls. We should honor it but not hope to see it develop further. Not for a thousand years, anyway; perhaps a million.