The Evil Muse of Bradley Smith 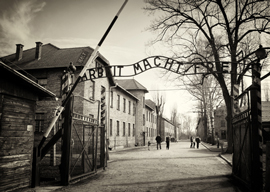 As the serious revisionists”none of whom deny that the Nazis hated Jews, nor that they shot or let starve plenty in concentration camps”will admit, there are dishonest folks with agendas on their side as well.

The infamous “Jewish revisionist,” David Cole/Stein, in his recent, hilarious memoir Republican Party Animal, expressed his vein-popping frustration with both sides: the conventional historians went bonkers when Cole refused to “admit” the fake gas chamber at the Auschwitz museum was real … but when he tracked down what appeared to be an actual Nazi gas chamber hidden away in France, the revisionists went just as bananas.

Even Smith, in some of his writings, gets almost as emotionally overbearing about the poor, slandered Germans as Holocaust Industry true believers get over the myths about pants made of skin. Smith is zero percent German-American, however, with no dog in the fight, and I suspect that like any literary writer he gets embarrassingly het up over unfairness, especially when it’s not about him.

But to paraphrase the “moderate revisionist” Samuel Crowell (really a generalist, who’s moved on to a brilliant study of Shakespeare) in The Gas Chamber of Sherlock Holmes: Conventional historians are not part of a conspiracy any more than the average Jerry was. They”ve accepted a narrative that began as mass hysteria, which was a perfectly human response to the chaotic, narrative-poor horrors of war.

This reviewer is not an historian”though I tend to lend an ear to people who present facts over those who present hysterics”and I don”t know enough to agree with either side. Nor will I cite the First Amendment; if you need a legal writ to force you to respect differing opinions, then you”re the kind of yahoo that Cicero used to say needed the fear of the gods to stop you from murdering everyone. Reading Bradley Smith is about treasuring good writing, regardless of whether you deem the author’s opinions worthy of your moral rubber stamp; see also CÃ©line. But if you must have a moral, Smith earned every phrase the hard way.