The Game of Blasphemy 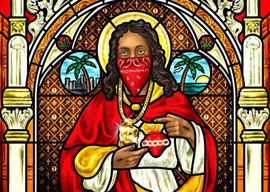 Last week, one of the realest niggas in rap dropped his fifth album on yo ass, and mad bitches started to trip the fuck out. If you haven’t heard of The Game, you don’t know what time it is. He’s the guy who tattooed a butterfly on his face and then covered it up with “LA” and then put a star on that. His name means “the act of acquiring money by any means necessary, including crime” and his album Jesus Piece refers to the ridiculously large medallion successful rappers and criminals pay Jacob the Jeweler $50,000 to make.

The album cover features Jesus looking mad gangster with his own Jesus piece and a Blood bandana on his face. The Game claims the album is a testament to his recent discovery of Christ and the gangsta elements of the cover are his way of keeping it real. As he puts it:

…I wanted to make an album where you could love God and be of God, but still get it poppin’ in your life.

Get it? Basically, the guy is a complete idiot. Not only is he totally unaware of his own blasphemy, he thinks it’s a tribute.

Michelle Malkin doesn’t care what his intentions are, and within hours of the record being released, she said to her half-million Twitter followers:

In a world where big white men are petrified of being called racist, this tiny Filipina seems to be the only one brave enough to call rappers out. It’s not that she hates rap; she’s the only one who doesn’t give it a free pass. When the Washington Post nominated The Coup’s Party Music as best album of 2001, she called it a “stomach-turning example of anti-Americanism” and pointed out the original album cover showed the band blowing up the World Trade Center. They made the cover a few months before 9/11 but the sentiment wasn’t unusual. After 9/11, Paris’s Sonic Jihad featured a plane flying into the White House. In 2007, Malkin exposed Akon for sexually assaulting a 14-year-old girl, and Akon subsequently lost Verizon as a sponsor.  She calls Obama the “Hip-Hop President” and ridicules Ludacris for his corny song about painting “the White House black.”

Two days after Malkin’s Muhammad quote, The Game (or as he’s known to his million Twitter followers, “Handsome Ass Nigga”) remained true to his IQ and came back with, “you are the EPITOMY [sic] of a RACIST !!!”

“You don’t have to be white or Christian to belong in America, but for Christ’s sake, show some respect.”

The two argued it out on Twitter and she documented the spat on her website Twitchy. She told him how to spell “epitome,” and he told her she’s “blasphemist.” Then he suggested she check a track on his new album called “Church,” which contains the line “I’m-a crucify that pussy.” The song juxtaposes his old life with his new life, comparing his love of strippers with his love of Christianity.

I bought the album and listened to it all week. It’s actually pretty good and although the lyrics sound like they were written by a cokehead with Down syndrome (“Angels lined up in my honor, your honor”), it’s clear this guy thinks he’s being reverent in a cool, “street” way. I believe he believes Malkin is too racist to notice this, but what she said is 100% correct. Neither The Game nor anybody else would dare depict Muhammad that way. They wouldn’t depict Muhammad at all. In America, blacks and Muslims are precious unicorns who will turn to fairy dust if you touch them.

The Game’s fans appear to be even more retarded than he is. They attacked Malkin with threats of a “boycotte.” Her websites lost approximately zero viewers, and Fox News suffered similar losses. They repeated the racist accusation ad infinitum while also saying she looks like she got hit in the face with Jackie Chan’s dick (so that’s how Asians are made). These ninnyhammers talk about respect and racial equality while calling Malkin an Asian “hoe” and threatening to kill and rape her. They feel comfortable doing this because the underprivileged are untouchable in this country, and mocking the majority has gone mainstream, especially in rap. Not only does almost every song on Sirius’s Hip-Hop Nation promote gun and drug culture, all the rappers seem to be locked into this “poor me” mentality where nothing has changed for blacks in the past fifty years and America is out to get them.

In the 2004 song “Why,” Jadakiss asks, “Why they still hanging black bodies in Mississippi?” even though the only black man to be hanged there in the past half-century did it to himself. Then Nas “spits” on the mic and wants to know why “won’t we build our own airline, states, and highways/Fly to Africa, do some trades with Zimbabwe?” Uh, you can’t do any business with Zimbabwe because they killed most of the white people.