The Ghosts of November 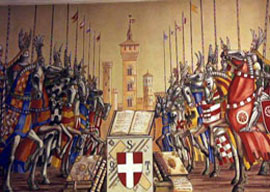 But autumn, when the American air is full of footballs, is also the time of All Hallow’s Eve and masked pranksters roaming every street of the Republic demanding treats. It’s clearly no accident that American elections are held right after Halloween. In Britain, with its quaint but durable constitution, elections can come at any time of year like hailstorms. With no political orgy to follow the witching hour, Brits had to fabricate a substitute. They did so brilliantly, thanks to Guy Fawkes and his Gunpowder Plot’s fortunate timing. Remember, remember the Fifth of November; while we are making live politicians squirm under the TV lights, they are hanging a dead one in effigy and then burning him.

Even before Guy came along to give autumn a patriotic twist, the British were lighting bonfires to mark this charmed corner of the year. America’s political folkways come largely from the Celtic fringes, from Ireland and Scotland. There, Hallowe”en was the ancient Celtic festival of Samhain, the transition from summer to winter. After the flocks were herded down from the mountains and the corn was gathered in barns came this hallowed night when the dead themselves rose from the graves.

According to Sir James Frazier in The Golden Bough, “the souls of the departed were supposed to revisit their old homes in order to warm themselves by the fire and to comfort themselves with the good cheer provided for them in the kitchen or the parlour by their affectionate kinsfolk.” Something of this ancient rite survives into our own times, as in Chicago, where only two decades ago ghosts would rise from every cemetery to register their desires at the polls. The more civic-minded of them did the same at Beltane, the spring festival, for the primaries.

Anthropologists see a recurring motif in the Celtic bonfire festivals: expulsion of the scapegoat. In Scotland before gas heating, Frazier says the boys would go begging lumps of peat at every house, saying: “Ge’s a peat to burn the witches!” With these they would build a fire, and each in turn would lay as close as he could to it without getting scorched while the others would run through the smoke and jump over him. When the fire was done the boys would scatter the ashes, and each would do his best to make the others as black as possible.

A better account of an American election could not be written. But it’s time for bed, children: Say your prayers and get under the covers and I hope for your sakes you”ve been good because when there’s a big red moon like that out they say the Republican walks by night and he looks in ev”rybody’s windows. Cover up now, you chillun! Or as the Hoosier Poet, the immortal James Whitcomb Riley, warned us long ago: