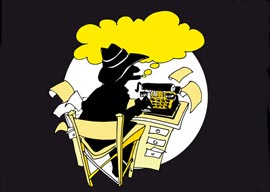 I won”t bother lying. I ran across the absurdly prolific blogger and novelist James LaFond whilst I was mired in the shameful act of Googlebation: typing your own name into Google to see what the hive mind thinks of you today.

Hey, I rationalize, I”m a no-name novelist whose publishers have no advertising budget, so it’s part of my job to scan for reviews of my work on tiny blogs and post them everywhere I can. Then maybe I can sell two books this week instead of one. But let’s face it, I”m really scanning for people who are saying nasty things behind my back. That’s the true guilty pleasure.

Anyway, LaFond mentioned me (kindly, alas) on his eponymous blog because he noticed I was reviewing books in this space”although he didn”t seem to feel the urge to send me any of his own multitude of books to review.

LaFond”whose topics range from boxing and ancient Greek warfare to the history of worldwide slavery and a unique theory about the media blackout on nonwhite criminals”complains half-heartedly about the mediocre size of his audience. But aside from writing new blog posts on a near-daily basis, he doesn”t act very aggressively to enlarge it.

When I noticed I was devouring his blog in large chunks, I decided to approach him myself for review copies of his books. So he protested that he’s had more luck in this business than he deserves, and told me I should interview some young unknown instead. This would make some sense if his own sales hadn”t been hovering between 200 and 300 books a year from 2001 through the present.

“”I have chosen to explore certain science-fiction subjects in such a way as to ensure low appeal,” he tells me.”

For example, his modus operandi for his current project, “the Sunset Saga,” a 21-book-long sci-fi project set in the 29th century, sounds like a blueprint for commercial failure. “I have chosen to explore certain science-fiction subjects in such a way as to ensure low appeal,” he tells me. The books describe a “genetic re-creation project” that attempts to bring back geniuses like Socrates and near-extinct groups like Native Americans. “This would ostensibly appeal to “liberal” readers. However, I write in a realistic vein that appeals more to right-wing readers, and end up producing something that most lefties and most righties will not find appealing.”

There’s a cunning strategy for you.

Part of me suspects he doesn”t want success because, as things stand, he still has to hold down a scut job at a supermarket, and the characters at work provide him with too much material to give it up. He appears to be a genuine graphomaniac, by which I mean he’s more interested in writing down as much stuff as possible than in being read or paid attention to. As he puts it: “I am trying to cough it all up so I die with a minimum of it between my ears.”

Like his books, his blog is almost too prolific to keep up with. It’s a mix of nonfiction and serialized fiction; particularly catchy are the true tales from work, which are animated by well-captured dialogue and the inevitable comic insanity of letting hungry hominids loose in a public space. The books are a mix of collections from the blog and new material, and he’s self-published most of the volumes”thirty or so, he figures”on Amazon, with more books being added as he gets around to it.

Though LaFond claims to be poorly educated, his essays on politics are written in the classic “brainy American autodidact” style that goes back past Thoreau. On the other hand, the the conceit he uses in the sparkling essay collection Take Me to Your Breeder“in which he pretends to be an alien zoologist who’s using the body of “James LaFond” as a vehicle for observing us puny apes”reminds me more of Vonnegut, albeit even more misanthropic.

America did not become a world class power until a full generation after the end of chattel slavery. A nation cannot build the industry capable of arming and grinding to bloody mud tens of millions of soldiers on the shoulders of a malnourished minority toiling under the same system that barely fed their ancestors 2,000 years ago.

His fiction covers a wide variety of genres, always with some twist on the formula. But lest “twist” should give you the idea that the original bits are merely gimmicks: what elevates the work above high-concept noodling is humor and psychological depth. The best of his books I”ve gotten to so far has been Hurt Stoker, a novel in the alternate-history genre that goes in a spit-take-worthy direction: LaFond imagines that the South won the Civil War and seceded.

As the book slowly reveals, black Southerners remain a source of forced labor, but instead of being chattel to individual plantation owners, the system has evolved so that they are “wards” of the state, which both controls and protects them. They need protection, it turns out, because those beer-swilling Northern rednecks love to cross the border and lynch them, partly out of racism and partly to mess with Dixie’s labor resources. The state employs the divide and conquer method to keep its inmates in check, just as in reality; LaFond shakes the configuration out differently in order to freshly examine the underlying power-lust.

It’s illegal for black Southerners to own property, not that that this stops particularly determined black guys from making a comfortable living. The more cowardly do so within the system, usually through the NBA”short for Negro Bond Association”a kind of combination labor union and law enforcement body. The more enterprising carve out a place at the edges of the law.

The latter group includes the protagonist of the tale”a biracial former baseball player named Whiff who’s now built a career as an entertainment impresario. He uses white lackeys as legal placeholders for his carnival show; through these avatars he exploits underlings of various races as well as the spectacle-greedy public.