The Great Circle of Despots 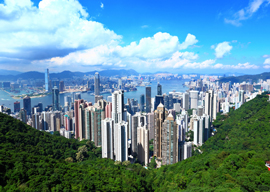 The willingness of China’s leaders to leave Hong Kong alone this past 17 years has been remarkable. China is, after all, a one-party state run by control-freak apparatchiks.

The great anomaly noted by those Heritage reports has been wearing down the ChiComs” restraint, though. Like the scorpion in Aesop, they can”t be other than what they are. The Party bosses have been signaling that they want Hong Kong to be more … Chinese.

The nearest thing Hong Kong has to a constitution is the Basic Law that took effect at the handover from Britain in 1997. Article 45 of that law says:

The ultimate aim is the selection of the Chief Executive by universal suffrage upon nomination by a broadly representative nominating committee in accordance with democratic procedures.

The rulers in Beijing made it plain in a ruling this August that “broadly representative” means “approved by the Communist Party.” That has brought thousands of young protestors out on the streets of Hong Kong, and that’s what you”ve been seeing on your TV news, after the segments on George Clooney’s wedding and the latest flare-up of race hysteria.

How will it end? In tears, of course. Oriental despotism has no room for Anglo-Saxon liberties, any more than it had for the republican vitality of medieval Italian city-states. We”ve been here before: I wrote a novel about it.

I just hope that Hong Kong, six hundred years on, will at least have a decent soccer team.