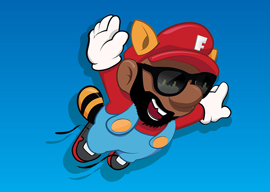 Jesus Hotep”whose yam-sized proboscis recalls that of one-hit hip-hop wonder Humpty Hump“recently appeared on Red Ice TV, which is a sort of white-nationalist Infowars, to discuss all this ideological dovetailing with the Alt-Right. In the midst of discussing fractional reserve banking and the silent race war between blacks and Hispanics, he told host Henrik Palmgren that both the Hoteps and the Alt-Right “poke fun at the left together,” and if the two groups aren”t exactly about to form an “alliance,” they should at least declare a “cease-fire.”

The much chubbier but equally amiable Uncle Hotep made me laugh out loud in a segment on how the endless drive for “diversity” ruined his beloved comic-book industry. “Thor was my nigga,” he laments. “They made Thor female. I”m like, what the fuck is this shit?” He says that if blacks want a black superhero, they should create their own””Make him “Super Jamal” or some shit like that.”

Uncle Hotep slams The New York Times” recent attempt to “debunk” the phenomenon of Irish slavery. He claims that “sanctuary cities“ are part of a plot to “de-whiten” urban areas. While acknowledging the racial IQ gap, he says that in the end it doesn’t matter as much as culture:

That’s another topic on which much of the Alt-Right the Hoteps overlap”they depict leftism as mostly a Jewish phenomenon. Whereas the Alt-Right use the (((triple parentheses))), the Hoteps ironically refer to “they,” “them,” and “the man behind the curtain.”

As the days grow longer and I bask in the warm Southern springtime sun, it is almost impossible to express how refreshing I find it to see black dudes who”ve deprogrammed themselves from the leftist brainwashing that passes for objective reality among people of all races. To hear some guy who looks like the bastard son of Bob Marley and Jimmy Durante wax endlessly and humorously about fiat currency, black-on-black crime, misandry, the long history of Arab/Muslim animosity toward and enslavement of black Africans, global finance, George Soros”and especially to use “leftist” as a pejorative rather than “white””well, fellow travelers, it fills my lily-white heart with a perhaps naÃ¯ve and ultimately doomed sense of hope for the future.

But maybe more than anything, seeing these Happy Hoteps reminded me of how naturally funny black people can be when they aren”t trained to be perpetually scowling, chip-on-their-shoulder, racial vengeance-mongers. I can”t remember the last time a white liberal entertained me more than Uncle Hotep or Jesus Hotep do. As my parents always told me, those Negroes are great entertainers.