The Inmates are Running the Asylum-Seekers 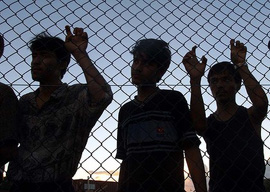 During the summer of 2008 I spent several days on the Greek island of Patmos. Every morning on my way to the beach I would stop for breakfast in the port to meet my friends. We would sit in a little cafÃ© next to the police station. Eventually we noticed the island’s sole jail cell, which was adjacent to the cafÃ©.

The cell was small”maybe three by five meters”and packed. Arms were hanging out of the two windows that faced the main square. Eventually one of my friends went over to see what was going on inside. There were about 15 people”men, women, and children”locked up. They often pled for cigarettes, which we happily provided. We got to know some of them. The men who spoke English were educated. One was a scientist. They had come from Iraq. War refugees. They were being held indefinitely. No one knew what to do with them. Fortunately, Patmos isn”t a bad place to be locked up. But Greece isn”t exactly where one wants to be at the bureaucracy’s mercy.

The hot-button issue in Switzerland these days seems to be asylum and immigration. Switzerland currently hosts nearly 62,000 refugees and asylum-seekers. Cantons are struggling to absorb the influx. Permanent shelters are full, and additional accommodations are in demand.

The increase is attributed to changes in North Africa. Asylum-seekers are mostly from Eritrea, Nigeria, and Tunisia, comprising roughly 2% of Switzerland’s total number of foreigners. Some locals worry that they”re a safety threat. Others are more concerned with humanitarian principles.

If we lived in a world without borders, the burden of responsibility would fall on everyone, no matter how distant our points of origin. But as we do not live in such a world, there is only a moral responsibility to one’s immediate community. Any further responsibility is an individual’s choice”in theory, anyway.