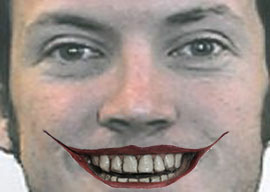 “But he couldn”t have done this without guns,” the gunophobes insist. Wrong. He could have blasted the entire theater with a fertilizer bomb. Timothy McVeigh snuffed out 168 lives without firing a bullet.

Slipping further from reality into fantasy”or, if you prefer, into hyperreality“others have shifted the blame onto an ultraviolent pop-culture climate where movies, video games, and comic books have desensitized people to murder. This theory is given a bit of credence via a disturbing string of coincidences: the fact that James Holmes reportedly dyed his hair flaming red and told police he was the Joker; the fact that Warner Brothers had been packaging The Dark Knight Rises alongside a trailer for another film that depicts a mass murder at a movie theater; panels from a 1986 Batman comic featuring a shooting at a porn theater; and, perhaps worst of all, the fact that The Dark Knight Rises features a scene where villains shoot up and bomb a crowded football stadium.

But none of this accounts for the fact that there are millions of comic-book and gamer geeks who constantly expose themselves to such imagery and still wouldn”t hurt a flea.

When people do something “crazy” such as shoot up a theater full of people they”ve likely never met, there is no shortage of pop psychologists eager to blame it on an elusive “disease” called “mental illness.” Without ever having met James Holmes, pundits suggested he was “depressed,” had been “bullied,” was “bipolar,” a “paranoid schizophrenic,” and had possibly even been unwittingly subjected to government drugs or mind-control experiments during his stint as a neuroscience student.

The all-purpose bugaboo called capitalism was, natch, blamed for the shooting rampage, along with both Christianity and anti-Christianity.

Personal information about James Holmes is scant, and from what’s available, he appears to be a giant blank white movie screen upon which people project their confirmation biases. He left almost no trace of himself online except for an alleged recent Adult Friend Finder profile that shows him with the flaming-red dyed hair and describing his “Male Endowment” as “Short/Average” (translation: Very Short).

He reportedly had trouble finding employment after receiving an undergrad degree in neuroscience in 2010 and was said to have worked briefly at McDonald’s. Then after being accepted for the doctoral program in neuroscience at the University of Colorado, he reportedly withdrew from the program last month. During his time at UC, he was said to have expressed a specific interest in “the genetic basis for mental illness.”

Sometime in May, he allegedly began stockpiling weapons and ammo. He purchased two handguns, a shotgun, an AR-15 semi-automatic rifle, 6,000 or so rounds of ammo, a gas mask, and body armor. When apprehended after the shooting, he told police he”d elaborately booby-trapped his apartment with explosives, which took experts more than a day to safely dismantle.

Clearly this was not a crime of passion.

In a world where the idea of personal responsibility has been consigned to history’s dustbin, they”ve probed every possible reason for why he allegedly did it except the idea that he consciously chose to do it.