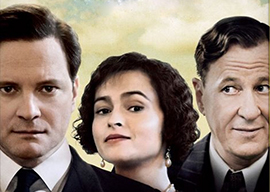 Luckily, in 1923 he was permitted to make a love match with Elizabeth Bowes-Lyon, the aristocratic thoroughbred who became the Queen Mum (1900-2002). Historian David Cannadine wrote, “In a life not distinguished by good luck or sound judgment, his choice of wife was a stroke of genius.” She is portrayed winningly by Helena Bonham Carter, for once unshackled from roles in her boyfriend Tim Burton’s movies.

After a disastrous attempt at addressing a throng at Wembley in 1925, the duke turned to Australian speech therapist Lionel Logue (played by Geoffrey Rush, who won the Best Actor Oscar for Shine). The duke assiduously followed the exercises prescribed, such as reciting tongue twisters. This allowed him to make a triumphant 1927 Australian goodwill tour. Logue continued as his speech coach following George’s unexpected accession to the throne in 1936 after Edward abdicated to marry a twice-divorced American adventuress. Aware of their monarch’s distress at speechmaking, subjects came to appreciate the dogged effort the king put into his official oratorical duties.

This isn”t much of a story, so Seidler improves history by dropping all the ho-hum business about getting ready for the 1927 Australia trip. In The King’s Speech, Logue doesn”t enter the picture until 1934, and the subsequent treatment course doesn”t take one year but five, climaxing with the king’s radio address after Germany invades Poland. (In truth, admiration of the Royal Family was rooted more in their not evacuating London during the Blitz. The queen said, “The children won’t go without me. I won’t leave the king. And the king will never leave.”)

Seidler also panders to contemporary identity-politics obsessions by implying that Logue’s service was kept secret due to bias against stutterers. In reality, Logue’s role was praised in the press as early as 1928.

Finally, Seidler undertakes a covert rehabilitation of the old Freudian “Tell me why you hate your mother” talking cure by having Logue succeed in getting the king to unburden his resentment of his starchy upbringing. Indeed, psychoanalysis sometimes can work well in a rent-a-friend sort of way. The implicit joke in Rush’s amusing performance is that Freudianism would have proved more lastingly popular if the prototypical psychoanalysts were casual Australians rather than formal Austrians.

Yet, in 2010, is it really helpful for Seidler to once again remind Brits to loosen up? The Greek and Turkish maids who have to mop up after 21st-century British louts on binge-drinking beach holidays might testify that they have already gotten that message.