The Last Gay Youth Club on the Left 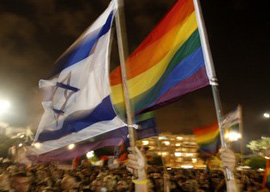 Eventually, a sordid soap opera emerged out of a “lost in translation” fog:

According to some gay jailhouse snitch, another gay guy”Ganon, it emerged”had molested some underage male who”d been hanging around the center. The victim told some lowlife family member, who got another lowlife to shoot up Barnoar in revenge.

Everyone arrested has since been named publicly, and they’re denying pretty much everything. Ganon first proclaimed his innocence, then admitted to “having sexual contact” with an underage boy”not the boy at the center of the revenge plot, however (who now denies Ganon ever touched him), but with a gay state’s witness whose latter-day jailhouse confession broke the case open.

And a “transgender woman” has just come forward to accuse Ganon of raping her ten years ago when she was still a he.

The only constant throughout this weird saga has been the liberal elite’s unshakable belief that the Barnoar massacre was a homophobic “hate crime,” an overt political act rather than, as now seems apparent, the culmination of a highly personal, almost feudal feud.

Never mind that two of those allegedly involved are gay men themselves, one a well-known hero in the “community.” Those facts don’t fit their well-practiced victimhood narrative, so Israel’s professional left keeps insisting those facts must be wrong.

A common refrain is that acts of revenge target specific individuals, not random strangers who happen to be in the right place at the wrong time. (Have these amateur criminologists ever heard of Sharon Tate, who was innocently subletting that Cielo Drive house from Charles Manson’s real target?)

Their desperation is palpable, and why not? If Ganon really did have sex with a minor at Barnoar, then “right wing” condemnations of a sinister, pedophiliac gay “agenda” will be impossible to dismiss any longer as mere hysteria.

Israel’s gay activists and their straight allies can’t accept that the tragedy they’d lovingly fashioned into a valuable souvenir of their own immaculate victimhood may have been just a sleazy “rape revenge” movie come to life”The Last Gay Youth Club on the Left, perhaps?

Having insisted for decades that homosexuals are “just like everyone else,” few gay activists in Israel or abroad seem prepared to admit that those “everyones” are bound to include sinners as well as saints, either from the wrong side of town or at the heart of their own “community.”