The Mainstreaming of Michelle Malkin 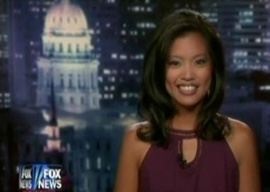 Her gaffes are beginning to approximate the silliness of such notorious verbal blunderers as W and Joe Biden. While visiting Boston, Palin explained that Paul Revere rode to “warn the British.” I learned the true story about Revere in the second grade. Yet this female proponent of American exceptionalism—who acted angry that Obama wouldn’t stand tall for democracy by intervening without European allies in Libya—couldn’t tell us what Paul Revere was doing on his midnight ride. Perhaps she should have crammed a bit more before embarking on her “American Heritage Tour,” particularly if she knew she’d be confronting unkind journalists who might actually ask her about America’s heritage.

And who is Michelle kidding when she presents Sarah as someone who doesn’t need the media? Like Michelle, she works for Fox and is probably handsomely paid for jabbering away on that network. She has also consistently been in the neocon corner on foreign affairs, and she seems to love rhetoric about “human rights.”

As a Republican journalist and media entertainer, Michelle is following in the well-trod path of others such as Ann Coulter. Like Michelle, Ann started out as a very feisty rightwing news commentator, but unlike Michelle, Ann could be devastatingly witty as well as edgy. But she, too, succumbed to various pressures and became a sharp-tongued version of Sean Hannity rather than remaining a figure of the traditional right.

Back in 2001, Coulter stated the unsettling opinion that we not only bomb Middle Eastern Arabs but also convert the survivors to Christianity. This scared the bejesus out of the kept goyim at NR, who immediately banished Ann as a regular contributor. But this, too, was part of the game. Ann was trying to differentiate herself from other supporters of the neocons’ foreign policy by attaching to it a Christian triumphalist tone. She also threw in an opinion that must have pleased her neocon paymasters when she praised how we “carpet-bombed” Germans during World War II. After all, Ann titled her column: “This Is War.”

Although sometimes compared to other conservatives-turned-Republican-propagandists, Pat Buchanan is a different case. Pat has always been a Republican and through most of his life has worked as a Republican operative. But Pat has broken with his party on nearly every major issue and will no longer be allowed on Fox. (He has become a fixture on the generally more leftwing but not neocon-supervised MSNBC.) A fact often noted—that he rallies to Republican presidential candidates shortly before elections—is an expression of a vestigial loyalty but nothing more. An adherence to GOP party lines is not evident in what Pat writes and says the rest of the time. The same cannot be said about Ann, Michelle, and most other Fox contributors.