The Meaning Behind the Madness 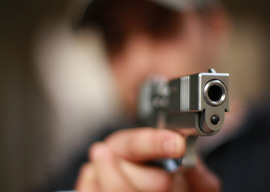 So while the act itself may have been madness, it is easy to suspect a very rational motive. Most people, even unbalanced people, play by the rules and if treated fairly will cause no one any problems. However, when they feel themselves abused, cheated, or penalized without cause, then those closer to the edge may react in irrational ways.

What went on in Holmes’s mind these past weeks? Was his mind on the years he wasted in a fruitless endeavor to jump through highly educated hoops so he could have the privilege of flipping burgers for the rest of his life?

Did Holmes wake up one day and simply say to himself, “It isn’t fair”?

To date there is absolutely nothing to suggest Holmes was cogent enough to make the connection between his unemployment and dispossession in his own land due to the relentless influx of those who had taken both his job and his very birthright. That doesn’t mean there isn’t a strong association between the two. If a dog is beaten long enough he’ll begin biting, even if he can’t explain why he was thrashed in the first place.

Holmes was a young man who did everything everyone told him in order to succeed. He meticulously followed the path to success all along until he reached an intersection and possibly realized that his nation had erected a “Dead End” sign to bar his progress. No matter what he did or how well he did it, ability is no excuse in modern America. This young man had everything going for him except his country.

None of this is to excuse his deplorable actions. They were obviously wrong, stupid, and evil acts committed against total innocents. Moreover, the suspect’s dyed hair and claimed identification with “The Joker” from the Batman comic books may demonstrate a dissociative state.

In other words, by this time he had snapped.

Yet none of this indicates there wasn’t a reason for his mental devolution or eventual deeds, even if Holmes never recognized the aggregate social correlation himself. Citizens grant government their consent on the condition of protection: of borders, of nationality’s benefits, and against unfair competition via unqualified competitors given special exceptions or unearned privileges. When authorities abrogate this social contract‘s rules, there is no reasonable expectation for anyone else to obey them. This is not mere insanity, this is the way toward total anarchy.

Given society’s direction today, there may be many more young men and women spanning the Western world who have done all the right things, only to find themselves wronged in every way. The current Batman film is the end of a trilogy, yet one may suspect that another sort of drama is only beginning to unfold.