The Media and Relevance: A Slow Fade-Out 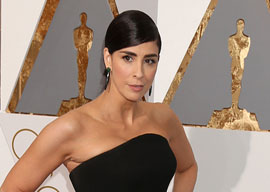 The jokes in the episode are not typical “setup/punchline” gags. They”re offensive for the sake of being offensive, and the desired response is either (from fans) “Dayum, I can”t believe they went there; that is harsh!” or (from squares) “This is hateful, disgusting filth, and Comedy Central should be ashamed of itself.” For Silverman, either response is fine; if she can”t get laughs, she’s content to just push buttons.

Well, here’s the thing”the trolls who torment her with anti-Jewish tweets are looking for the exact same responses. Either they want to be cheered for their outrageousness or condemned for their insensitivity. But guess what? The trolls who elicit a response from Silverman in full view of her 10.1 million Twitter followers are reaching a larger audience than Silverman did with her “Wowschwitz” episode (by season 3, Sarah Silverman Program episodes were pulling in well under a million viewers each week). Trolls are essentially doing Sarah Silverman’s routine to Sarah Silverman, in the presence of more viewers than she had on Comedy Central.

Through social media, you can be a sitcom star in your own living room. The Sarah Silvermans of the world lose relevance when anyone can do the same shtick on their mobile phone, and get exposure to an audience that dwarfs that of a typical basic-cable program. Plus, there’s additional fun in the fact that it’s real life. You”re not writing a sitcom; you”re in the sitcom. In her show, Silverman played a character who annoyed her friends by pushing the envelope of offensive humor, and now you have the opportunity to annoy Silverman in the same manner, in the real-life TV show that social media allows us to star in every day.

Hollywood celebrities have only their own inflated egos to blame. They want to have tens of millions of social-media followers? They want to elevate every slight from every troll into a mini-Holocaust? Fine. But in doing so, they”ve turned themselves into comic foils…straight men for exactly the kind of people who, in times past, would have had to live vicariously through purposely offensive envelope-pushers like Silverman. Now those formerly passive viewers are the active “stars” of the show”and the Sarah Silvermans and Patton Oswalts have become the stodgy neighbors and humorless coworkers…Mr. Wilson to Dennis the Menace, Charles Emerson Winchester to Hawkeye and B.J., Carl Winslow to Urkel.

It’s a brave new world, in which formerly mighty news media giants are left standing out in the cold during presidential press conferences, unworthy of even a chair in the room, and Hollywood celebrities, shorn of influence, are reduced to bitchy, whiny, stuttering pricks who play straight man to Twitter trolls. I must confess, I like this new era. Long may it last!