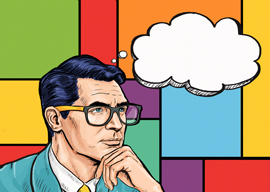 A few weeks ago, when a virginal loser with a gopher’s ass for a beard shot up the offices of a Maryland newspaper, social media was flooded with tweets from members of the press (a.k.a. America’s least trusted profession, and yes, that’s counting Indian guys who call from “Microsoft security”) in which these self-appointed “guardians of truth” castigated the rest of us for not, you know, liking them more. We’re the most important pillar of a free society! We’re out there every day fighting for the truth! Why don’t you love us, you stupid dicks?!

Ah, media hypocrisy at its finest! After 9/11, the response of many mainstream (i.e., left-leaning) news organs was to ask, “Why is the USA so hated?” Literally, “Why do they hate us?” became a media mantra in the months following the attacks. This was an example of the press doing what it does best—pretending to advocate introspection. “Yes, thousands of Americans have been killed, but our job is to rise above emotion and ask the hard questions.” For journalists, introspection is easy when you’re telling someone else to do it. It’s like when the media lectures white people, “If blacks seem hostile to you, look inside yourselves and examine what you’re doing to invite that hatred. Hard as it may be on the ego, examine your hidden motivations, your unconscious biases. It’s not up to blacks to stop hating you; it’s up to you to understand why they hate you.”

Funny enough, though, in the wake of the Maryland shooting, when journos from many of the largest news organizations in the U.S. were decrying the fact that so many Americans are hostile to them, you know what I didn’t see? I didn’t see one of those “hard-question lovers” asking, “Why are we so hated? Why are we so mistrusted? Could it be, perhaps, something that we’re doing? Could it be even slightly our fault?”

With the media, self-examination and soul-searching stop at the newsroom door.

“For journalists, introspection is easy when you’re telling someone else to do it.”

To be clear, I’ve met and worked with many fine journalists over the course of my life. Good ones, skilled ones, professional ones. Some of these folks have even become personal friends. I think of journalists much the same way I think of Muslims—one-on-one, they’re usually fine. I’ve met many kind, intelligent Muslims in my life. But in large groups, they’re trouble, because many of them harbor a fanatical belief that they alone know “the truth,” and—when empowered—that vocal segment will attempt to impose that agenda, that bias, on everyone else.

If I were to provide my favorite example of mainstream journalistic hypocrisy, it would be the story of Frederick Bernard Cheaves. If you’re playing along, this is where you’re supposed to say, “I have no idea who that is.” At which point I wag my index finger in your direction and, with a big, smug smile on my face, reply “Exactly,” making sure to draw out the final syllable for maximum annoyance.

Freddie Cheaves was one hell of an angry black man. Oh, his business card might have said “screenwriter,” but that was more of a hobby compared with his true occupation as an angry black man (the pay’s better and there’s more job security). In 2002, Freddie decided to strike a blow for black people against their one true enemy—the L.A. Times! Now, the Times has a mile-wide bias in favor of black activists and their causes. This is a newspaper that had no problem putting the lives of every woman in the city at risk by sitting on a story about an at-large black rapist-murderer…this is a paper that hid the description of an at-large black serial killer, putting everyone’s lives at risk…all so as not to spread “negative images” of black men.

So what was Freddie’s beef? We may never know. But in the words of a certain marble-mouthed masked supervillain, it doesn’t matter who he is, what matters is his plan! And Freddie’s plan was to burst into the Times headquarters in downtown L.A. and announce to the world that he had a bomb, and he was gonna send himself and everyone else in the building to meet Black Jesus if he didn’t get to air his grievances.

The only real evidence we have of those grievances comes from the 911 call he placed from the Times HQ, in which he explained to the operator why he was threatening to blow up the paper: “L.A. Times kill our black kids, beat our black kids for the last time.”

Behold the literate screenwriter at his finest!

It turned out that Freddie had no bomb. He gave himself up and was arrested, tried, and sent to state prison. You’d think that if there’s one crime the L.A. Times would report on thoroughly, it would be a crime committed on L.A. Times property. Literally, a crime that happened in their own fucking building. But no. The Times purposely sat on any mention of Cheaves’ accusations against the paper. I say “purposely” because when the story first went online the day of the incident, reporter Anthony McCartney dutifully mentioned those details. But within hours, “Not Me” from Family Circus had magically erased any mention of the “L.A. Times kill our black kids” rant. I emailed McCartney that morning, and he was pissed at the redaction. The poor bastard obviously didn’t realize the character of the people he worked for. In all of the Times’ subsequent coverage of Cheaves’ arrest, trial, and conviction, the paper never once mentioned the substance of Cheaves’ complaint.

If you do an L.A. Times site search for “white people,” you get one article after another that condemns whites for who they are, what they do, even where they live. Pieces with titles like “I no longer have hope in white America,” “White people, could you stop calling the police on black people?,” “Why the Waffle House shooting should get us talking about white privilege,” “Whites are moving back to Inglewood. There goes our neighborhood,” “White people should be more afraid of other whites than they are of people of color,” “White people, be afraid—of other white people,” “White Americans are nearly as blind to their racism as ever before,” “Yes, white ‘privilege’ is still the problem,” “Facing up to being white,” “The dark side of white,” etc., etc.. Same message: Look inward, white people! Examine your faults!

But did the Times editors ever display even one column inch of “introspection” regarding Freddie Cheaves’ accusations? “We may disagree with what Cheaves said, but gosh darnit, we need to search our souls to understand why a black man could hate us so!” Nope, they censored the details like a Soviet commissar. Cheaves may have been a nutcase, but his motivations were a legitimate part of the story. And the Times, so quick to print any condemnation of whites no matter how ridiculous, whitewashed the claims of a black man because they were directed against the paper.