The Men Who Taste Jews in Their Sandwiches 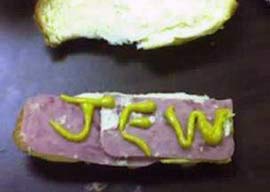 “¢ If you”re so secure that the evidence surrounding the Holocaust is irrefutable, then why jail people who question the evidence? Why does the Western media feel compelled to mention the Holocaust almost daily while it routinely ignores the 30-50 million non-Jewish civilians”not soldiers, but civilians”who were killed in World War II? Were their lives not nearly as important?

“¢ Why are certain “right-wing” writers brave enough to criticize communism, open immigration, the liberal media, and political correctness while they”re mortified to even consider that Jews were often the primary architects behind such movements”or at least disproportionately represented?

“¢ Isn”t the idea of “God’s Chosen People” cosmically racist and supremacist? Is the Talmud not hostile to goyim? Haven”t the Jews historically been racially separatist, all while accusing other groups of “racism”?

“¢ Is it even remotely possible that Jewish behavior, rather than a murkily mystical and ultimately unprovable notion such as “anti-Semitism,” sometimes led to negative perceptions about Jews? Even once throughout history?

“¢ In a European Union document calling for “equal treatment between persons irrespective of racial or ethnic origin,” why does it urge that we should focus “in particular” on “anti-Semitism” if everyone is to be treated equally?

“¢ Why does our current cultural climate allow one to decry “white privilege” but never “Jewish privilege,” especially since Jews are undeniably overrepresented statistically when it comes to wealth and power?

“¢ At the moment, Israel and some of its enemies are lobbing missiles at one another. Why should I care about Israel? Why should I deem this dubiously founded and eternally disruptive nation so important that it’s worth starting World War III, shoveling out tax dollars, and enduring much of the world’s wrath to protect it? What do I get out of the deal?

So those are my questions. I won”t hold my goyishe breath waiting for you to answer them. But dismissing them outright as “paranoid” or “anti-Semitic” is either dishonest or naÃ¯ve.

My questions are honest and sincere rather than “hateful,” and calling me all the nasty names in the Torah won”t budge my feelings or cause me to relent. And I believe that a huge quotient of the population has similar questions but have been terrorized into silence at the mere thought of asking them. As a truth-seeker rather than a team-joiner, I find this troublesome. So sue me!

And this is the main reason why The Men Who Taste Jews in Their Sandwiches are such a pain in my tuchis. They live up to the crude stereotype of rabid, delusional anti-Semites, and by so doing, they tend to allow all criticism of Jews to be painted with the same broad Jew Brush. They”re the ones who tend to give so-called “anti-Semites” a bad name. It almost makes me suspect that some of them may be Mossad agents.