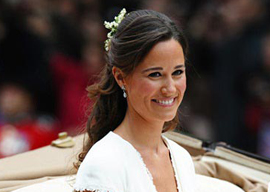 The cakes have been cut, the disco balls dismantled from Buckingham Palace’s throne room, and those lovebirds, Will and Catherine, shared two kisses heard “round the world. But what will be the lasting legacy of this year’s royal wedding? Why, it’s the semi-nude photos of those attractive Middleton siblings that have been making the rounds. Kate’s little sister Pippa attracted plenty of attention in her clingy Sarah Burton bridesmaid dress, but racier photos have come out showing her dancing in a bra and having a swinging good time in her younger days. Meanwhile, fans of James Middleton can feast their eyes on a treasure trove of photographs showing him horsing around like a frat boy and dropping trou. The family may have ditched the “middle-class” moniker”but their clothes seem to have gone with it.

The royal newlyweds have had a relatively quiet week since their wedding. Will and Kate postponed the honeymoon, and Kate was spotted grocery shopping. Ah, wedded bliss. It was also revealed they”re tacking on a trip to Los Angeles when they visit Canada in July. Kate’s never been out of the country. Just wait until she gets an eyeful of Rodeo Drive…but in all seriousness, expect the paparazzi to hound them like wolves upon their arrival. Remember the big stink that was made when the Beckhams came stateside? And Victoria doesn”t even have royal blood.

Sarah Palin’s slipping in the polls and is now almost a non-entity in the 2012 race. Her daughter Bristol doesn”t seem to be coping very well. After her stint on Dancing with the Stars she’s stepped out with what looks like a new face. Her jawline is noticeably slimmer and her chin much more pronounced in photos from a recent appearance. It could be chalked up to losing weight, but Bristol looks pretty much the same everywhere else. Expect Mama Grizzly to unleash on the haters in 5…4…3…2…

Newsflash: Charlie Sheen still thinks highly of himself. The disgraced sitcom star asked to be paid $1 million to sit down for an interview with Vanity Fair. The magazine said “thanks, but no thanks” and went ahead with a piece about Sheen anyway. They uncovered how Sheen wrangled $100 million out of CBS, despite the network offering “only” $72 million for his work.