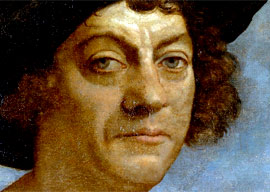 Today many Americans will be celebrating Columbus Day. Many others will instead be commemorating something they call Indigenous Peoples Day. Which camp you fall in largely hinges on whether or not you think Christopher Columbus was a big fat jerk.

To the best of my discernment, Indigenous Peoples Day exists for those who think it’s a noble idea to honor those who were too technologically backward to defend their own land. Perhaps its first emergence as a counter-celebration to Columbus Day happened in South Dakota, which in 1990 decided to host Native American Day on the second Monday of October. Two years later, the incurably Americaphobic city of Berkeley, CA swapped out Columbus Day for Indigenous Peoples Day.

Now a total of four states—South Dakota, Oregon, Alaska, and Hawaii—refuse to celebrate Columbus Day. Major municipalities that have chosen to turn their backs on the renowned dago explorer include Los Angeles, Minneapolis, Denver, Phoenix, Albuquerque, Salt Lake City, Austin, and, of course, Portland, OR, which should be officially crowned as America’s Whitest White-Hating Town.

In schoolrooms across the nation, Columbus is increasingly being depicted as a villain rather than a hero—someone who trampled on the gentle and progressive natives just because he wanted to be an asshole and impede their inevitable progress.

“I suggest we destroy all of our monuments and give everything back to the amoebae.”

And now the masked trust-fund brats of Antifa—who are aggressively attempting to knock out the very pillars of historically unprecedented privilege which enable them to commit idle acts of vandalism while living on SSI for their personality disorders and bleeding the state’s coffers for genital reassignment surgery, and who most definitely wouldn’t last twelve hours in any of the communist utopias they fetishize from afar—have declared today “Against Columbus Day” and are urging their acolytes to smash and deface any public monuments in honor of the man who, more than any other human in history, introduced the New World and the Old World to each other. Emboldened by the ritual defacement and erasure of Confederate monuments, these tragicomically unstable oikophobic nutjobs have already vandalized Columbus monuments in Chicago, New York City, San Jose, Yonkers, Binghamton, and probably even more places by the time you read this.

Under no uncertain terms, impervious to persuasion, and resolutely unwilling to entertain any opposing viewpoints, these fanatics declare that Christopher Columbus was a jerk. They blame him for singlehandedly launching the transatlantic slave trade with the same sort of blind fervor that they choose to ignore Muslims’ much larger role in the enslavement and transportation of Africans, a trade which began long before and persisted long after Europeans got in (and left) the game. These same types clench their eyes shut and plug their ears at any mention that black Africans also played a primary role in the African slave trade.

They will also fail to mention why Christopher Columbus sought funding to head west across the great blue ocean in search of Asia in the first place—because when Ottoman Turks seized Constantinople in 1453, the Great Silk Road and other land-based trade routes between Europe and Asia were cut off. It was these same Ottomans who would embark upon a centuries-long slave trade of European Christians. In other words, if Muslim imperialists hadn’t raped, pillaged, and killed their way into controlling much of Eastern Europe and enslaving untold numbers of white Christians, Christopher Columbus probably would have lived his days as a lowly Genoese cheese peddler.

Still, they are absolutely correct that Christopher Columbus did not “discover” North America. In fact, Columbus never set foot in North America. And Leif Ericson had established a settlement in Newfoundland roughly five centuries before Columbus first crossed the Atlantic. And people had lived in North America for millennia before modern Europeans arrived there—although some would contend that these formerly Asian settlers were only able to get a foothold in North America by wiping out a population of much older European settlers. I mean, if you really want to get into a pissing match about who were the original inhabitants of the New World, I suggest we destroy all of our monuments and give everything back to the amoebae.

The historical record also confirms their contention that Columbus was less than nice to the, shall we say, technologically underprivileged natives in the new lands he encountered. This included their enslavement, dismemberment, and even feeding their flesh to dogs. And on the island of Hispaniola—home to the notoriously prosperous nation of Haiti, the world’s most shining example of what happens once you kill all the white people—the native Taíno people were largely extinct within 100 years of Columbus’s first arrival. Historians disagree wildly on whether this genocide was deliberate or the accidental result of low immunity to diseases that had been imported from Europe. (A lesser known reverse atrocity is that some of Columbus’s men brought a monster wave of syphilis back to the motherland that killed one in six Europeans—five million at the time or 125 million in modern numbers.)