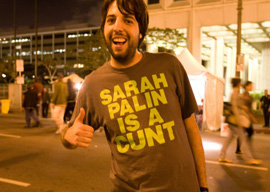 Later in the interview, Tyson had a name for what Palin “needed.”

You know the subsequent drill: a conservative site reposts the latest super-gross celebrity-made anti-Palin insults and duly scolds the offender—Louis C.K. and Christopher Titus are only two of those who’ve been locked in the stocks of late.

Bloggers and the media devote 24 hours to analyzing the comments, then another 48 analyzing the analysis. In the Tyson case, this included Tucker Carlson getting yelled at by “old friend” Greta Van Susteren. She claimed, not very believably, that she was angry with Carlson for even reporting the “story.” (See “Carlson explains to Van Susteren how quotation marks work.”)

The depressing infighting and ponderous “deep thoughts” these “controversies” generate are sometimes more painful to the eyes and ears than the original foul-mouthed remarks. (I’m convinced there’s a long, splintered, and by now smelly stick hanging by a string in the Mediaite office which all their writers are obliged to shove up their butts before they open a new Word doc.)

Tens of thousands of words later, nobody’s bothered asking why Tyson got to air Mandingo/Knoxville Horror stereotypes on the radio without getting a bullhorn in the ear from Al Sharpton. No one has even played the dog-eared “Can you imagine if Rush Limbaugh said that?” card. That’s because even the hackiest liberal knows by now: It’s different when blacks say this stuff. Period.

I’ll leave the ongoing fascination with Sarah Palin’s “womb” to any Jungian shrinks or even theologians who care to weigh in. Tyson’s speculum speculations pale in comparison to those of homosexual amateur gynecologist Andrew Sullivan, whose fascination with the ex-governor’s plumbing turned the once venerable Atlantic Monthly into a cross between Hustler and Family Handyman. (Oddly for someone who claims expertise regarding monthly cycles, Sullivan seems not to own a calendar.)

(Gay men—and men who might as well be—nurse a particular hate-on for Palin and her vagina, as her daughter Bristol correctly diagnosed, House-like, during her recent shouting match with one such in some sort of saloon. Again, I invite interested and qualified Ph.D.s to pick up the white courtesy phone.)

“I’m not saying she could be the next president,” Jean added, “but there’s something about her.”