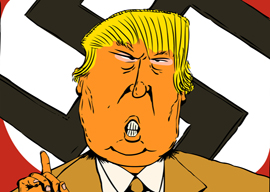 To all of the alt-righters who, these days, find themselves involved in mainstream politics for the first time, to all of those former outsiders who”ve spent the past week attempting to untangle Spicer’s contorted verbiage and explain to people what he actually meant, to all of you who found yourselves becoming more and more frustrated by the fact that Spicer, though correct in the essence of what he was trying to convey, didn”t have it in him to just stop and think a little bit about his words and the best way to use them, my message is: Welcome to the GOP, assholes. This is how we roll. Our candidates and elected officials tend to have communication issues, and we the faithful are always on the defensive, having to explain the words and communicate the ideas of people who bafflingly decided to enter a field in which having the ability to speak well and communicate ideas effectively is kind of a necessity. George W. Bush, Sarah Palin, Ben Carson, Dan Quayle, Rick Perry, Clayton Williams, Todd Akin, Richard Mourdock, Christine O”Donnell, etc., etc., etc. These are not necessarily stupid people (although a couple are outright morons); they just seem to have been mentored by William Archibald Spooner.

So, Trumpers, welcome to our briar patch. Enjoy your stay. Try not to get too badly pricked.

But here’s the thing: With most incoherent GOPs, there is, at least, an underlying set of ideological principles behind the gaffes and solecisms. With someone like Sarah Palin, for example, we had a pretty good idea what her beliefs were, so when she”d serve up another plate of shredded word salad, we”d still kind of “know” what she was trying to get at. We”d have at least a rough idea of what she was struggling to express. That made it easier to explain her to others.

But with Trump, who the hell knows what he believes anymore? Who the hell knows what he ever believed? During the election, hardcore Trumpers were willing to excuse the man for his lifetime of shape-shifting political allegiances and positions. Trump got a pass because throughout the primaries and the general, he came off as a guy with hardcore beliefs and a master plan to make them a reality. But now, with Trump having seemingly flip-flopped on Syria, NATO, China, Janet Yellen, interest rates, the Export-Import Bank, and Goldman Sachs, Trumpers don”t know what to think anymore. The popular theory is that the recent round of about-facing is due to a backstage tug-of-war between Steve Bannon and Jared Kushner. But even if that’s true, it tells us nothing about what Trump”you know, the actual president“believes. Where does he really stand on military intervention in Syria? Has he abandoned Putin for Xi? Trump is still the same political cipher he always was, except this time the shit really matters.

Trump is modern art. He’s a blank canvas, or a canvas with random paint tossed onto it by a monkey. You see what you choose to see. I read so many contradictory theories last week about why Trump “really” did what he did in Syria, it was like watching a thousand art critics analyze a Kandinsky. Here’s some random crap on a canvas; the best explanation wins a prize. You came for white nationalism? You leave with On White II. Trump is the living embodiment of Tom Wolfe’s description of modern art in The Painted Word: It’s not the art itself that matters; it’s the “persuasive theory” the viewer cooks up in his own head when staring at something that is purposely blank or purposely chaotic.

Trump is a modern-art masterpiece. His rejection of presidential realism makes even his underlings” slips-of-the-tongue the topic of fierce debate. Was Spicer’s Holocaust gaffe actually a consciously planned “dog whistle” shout-out to Trump’s anti-Jewish supporters? Was Spicer’s remark a sly, subtle endorsement of the claim that no Jews died in gas chambers? Was Trump, via Spicer, giving a very meta thumbs-up to Holocaust denial?

Or is Spicer just a stuttering fool?

Who knows? Who cares? As with all modern art, it’s not about the canvas but the criticism. As a longtime partisan hack, I”m just sitting back and enjoying the show without worrying too much about which Trump interpretation is correct. But I will admit this much: After years of watching GOP naturalists screw up painting after painting, setting out to depict a simple fruit bowl or flower vase only to end up with an incomprehensible monstrosity, I kind of like the idea that I”m witnessing a guy who’s going for incomprehensible monstrosity on purpose.

After all, it’s always a thrill to watch a master at work.