The Perv Behind the Badge 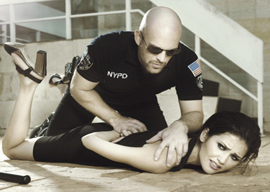 Being at the mercy of a person in uniform can drive a reasonable person to madness. But if you”re in a less-than-reasonable mood and you encounter a zealous TSA agent, you might find yourself in jail or on a no-fly list. In extreme cases, contact with a human trafficker in a UN uniform who has diplomatic immunity can get a person raped, tortured, and buried six feet underground. Given the choice, I”d go with the TSA.

After reading about Kathryn Bolkovac and UN involvement in human trafficking in Bosnia alongside recent events involving hookers and Secret Service agents in South America, one wonders how many incidents go unreported. We all know the TSA is a horribly flawed agency loaded with benighted manpower, but it seems like the higher the agency, the more lascivious the corruption becomes. Who or what is to blame?

“If we were all truly equal, there would be no need to distinguish between officers and civilians.”

On the outside one might think the trouble lies with naughty individuals. But institutions such as the United Nations which provide immunity to its officers afford a licentious creature the protection he needs to operate with little fear of reprisal. Without the badge, bad guys are nothing more than gangsters. Give them a badge and human trafficking flourishes because criminals are offered protection by the people who supposedly exist to protect the innocent. Obviously local policing is necessary in civil society, but why bother putting people in uniform if they exacerbate the problem?

Officers tends to infantilize people. Do adults really need a “hall monitor” to make sure no monkey business is underway? People tend to police themselves when left alone. This requires making decisions, which requires using one’s mental faculties, which can be challenging, at least for some people. Managing one’s total lack of power can be difficult as well, particularly when dealing with a person in uniform who is operating under the assumption that everyone is a potential threat rather than the more likely assumption that most are not. TSA agents tend to be the most unqualified individuals when it comes to managing the power bestowed upon them. Climb up the totem pole and you will find border guards, immigration officers, policemen, military officers, and Secret Service agents who are increasingly likely to be the sort of deranged individual you should fear. It makes a person long for the DMV lady.