The Princess of Miami 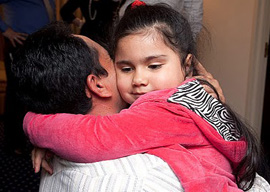 The big lefty news organizations geared up, the Justice Department could be heard clearing its throat in the background, and the CBP grunts knew what they had to do if they were ever to have any hope of job advancement: drop trou and bend over their desks as the immigration lawyers and lefty reporters swarmed in whooping and brandishing their subpoenas.

“Four-year-old Emily Ruiz flew first class from Guatemala to the United States Wednesday for a tearful reunion with her mom, dad and younger brother.

“Immigration officers treated her like royalty, said her lawyer, David Sperling. After her plane landed in Florida, one officer called her the “princess of Miami,” he said.”

Excuse me while I go make a call on the monster white telephone….

That’s better. I suppose it is pointless to ask why, once the CBP officers had Mr. and Mrs Ruiz in grabbing range, they didn’t cuff them for deportation as their duties require. Yes, pointless.

Meanwhile, what’s this? A new report from the Center for Immigration Studies. Well, they do good research. What do they have to tell us?

Report title: “Welfare Use by Immigrant Households with Children: A Look at Cash, Medicaid, Housing, and Food Programs.” Interesting. Whoa, what’s this?

Come one, come all! Never mind about paperwork: Just get here somehow, pop out a couple of kids”citizens!“and you’re on the welfare gravy train. All courtesy of Joe Taxpayer. Hey, you’re welcome!