The Retarded State of Public Debate 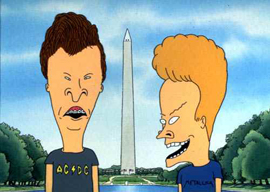 As the international embarrassment known as the American debt-ceiling debate winds down and Congress decides on how much more they should rob unborn Peters to cover for deadbeat Pauls, I feel like wiping the shit off my eyeballs after witnessing this endlessly infantile blame game. It’s a repulsive Punch and Judy show of exculpating and implicating, finger-pointing and blame-shifting, of mutual obstruction and, ultimately, of mutually assured destruction.

Since there will be no happy ending, this weeks-long “debate” boiled down to a drunken saloon argument over whether we drive into a brick wall at 85MPH or 95MPH. This country’s financial wad is red, white, and blown. Neither side wanted to admit that the nation’s financial condition is way beyond redemption. All they did was argue over an acceptable size for the tumor and tried to place blame for who caused it. Neither side is willing to admit that it’s terminal cancer.

That should be expected of politicians, especially in the all-or-nothing Manichean climate engendered by a two-party system. It should also be expected of anyone gullible enough to believe that either party represents their interests. To watch this sordid puppet show’s left and right fists sparring on public forums was to wish one could stuff them all in a cage and drown them down a well like unwanted puppies. I’ve never heard the sound of one hand clapping, but now I know what 307 million retards barking at each other sounds like.

“To observe this sort of discourse is to watch conjoined Mongolian idiots hocking loogies in one another’s face. We’ve reached rock-bottom on the dumbing-down.”

Has anyone else noticed a disturbingly rapid ossification of American political divisions over the past couple years? All grey areas have been obliterated in a collective ingroup/outgroup psychosis that dictates if you disagree with one team on a single, microscopic ideological trifle, you are entirely bought and sold by the enemy team. I’m sorry—did you just whisper something bad about Muslims? Well, the only conceivable explanation is because you’re slavishly beholden to your Zionist masters. Excuse me—did you just mutter something not entirely positive about the left? The only reason you could have done that is because you’ve been brainwashed by the right.