The Roof Korean Option: A Response to Rod Dreher 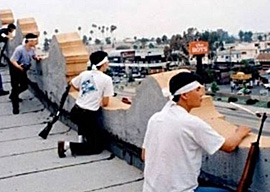 As the delightful giggles on crunchy-con Twitter indicate, Rod Dreher is very pleased that the forthcoming French translation of his most popular and lucrative work, The Benedict Option, was at least temporarily trending this week as the No. 1 book on Amazon.fr.

Having made the rounds in the American press this year, it was apparent to all that Dreher’s Benedict Option is a white flag in the culture wars. Dreher’s main point in the book is that “serious Christian conservatives” are no longer able to live “business-as-usual lives in America.” After making a rally during the reign of George W. Bush, Christians and other social conservatives have suffered defeat after defeat in the Obama era.

As a result, Dreher suggests that Christians completely cede the public sphere to the left, retreating into “intentional communities” of conservative Christians living, working, praying, and studying together. In The Benedict Option, Rod Dreher provides the examples of Catholic schools implementing a classical curriculum in Elk County, Pennsylvania, and the olive-farming members of the Italian Tipi Loschi community as models for the “hands on localism” of which the Benedict Option consists. Dreher’s hope is that unlike the French, Mexican, and Bolshevik revolutions and the Spanish Civil War, this time the left will largely leave Christians alone to procreate with abandon, attend the Latin mass, and homeschool lots of homophobic and racist kids.

Dreher might be a little neurotic and too revealing of his personal life, but he is not an idiot. He knows that his crunchy-con, overwhelmingly white Christian audience won’t stand a chance in a 21st-century America seething with ethnic tension under the umbrella of an increasingly totalitarian and coercive state that does not take lightly dissent from its doctrine of degenerate sexuality.

“In a strange blast from the past, the Roof Koreans have become heroes of the New Right.”

During his tenure at The American Conservative, Rod Dreher has made a living vacillating between liberal and conservative positions and has mastered the art of penning gushing, effeminate blog posts for consumption by equally neurotic, left-leaning conservative Christian women with secretly gay husbands.

When he is not white-shaming, boasting of his 0.6% black ancestry, or wearing outrageously ornate eyeglasses and women’s boots, Dreher spends his columns (often filled with more copy-and-pasted writings of other people than his own thoughts) taking his readers on an interminable emotional roller coaster back and forth between white guilt and pride in “the Western tradition” (depending on the week). Like a therapist who profits from his patients never getting better, Dreher has no real solution to any of the critiques he presents, because if he did, the drama would be over and millennial crunchy cons would not be able to share a cry with Rod over coffee and Ativan in the morning.

But then again, paradoxically, Rod Dreher’s Benedict Option actually is the solution to which conservatives (Christian or otherwise) should turn as a way of regrouping and preparing for a political onslaught on the degenerates and barbarians who have co-opted politics in the West.

The problem with Dreher’s version is that it is too wimpy, too whiny, and, well, too white.

Happily, the true Benedict Option has been unearthed by the enterprising members of Generation Z who populate the /pol/ message boards of 4Chan and alt-right Twitter, and there is another model for conservative survival in the 21st century: the Roof Koreans.

In a strange blast from the past, the Roof Koreans have become heroes of the New Right. Every time there is a major race riot (which seems like every couple of weeks now), enterprising white and Asian Gen-Z’ers put an ad on Craigslist offering the services of these Roof Koreans.

Who are the Roof Koreans?

Well, that is an interesting story that takes us back to 1992, the year of George H.W. Bush’s demise, Seinfeld, Billy Ray Cyrus (Miley’s dad), and the Los Angeles riots.

That great diversity parade known as the L.A. riots was a (temporary) wake-up call for most Americans.

While being dragged out of their cars and having bricks smashed into their heads, white people came to the rude realization that the Michael Jordan and Eddie Murphy look-alikes living in their city were not quite as friendly as they appeared on TV and in the movies.

However, another light-skinned, high-IQ ethnic group decided to take a different approach. As armies of gangstas and cholos swarmed into K-Town, rather than being robbed, raped, and beaten to death, Korean-Americans thought it might be a better idea to arm themselves and fight back.

Perhaps as a “throwback” to American Civil War battle tactics, the Korean business owners remembered that it is always best to have the high ground in a battle and thus climbed up on the roofs of their businesses in order to have a better shot at Tyrone and Jose when they came to liberate a bottle of Colt 45 from the convenience store these East Asian immigrants had built from scratch.