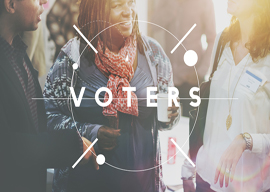 Nevada, a state where Trump is culturally at home, shows how immigration is slowly poisoning the well for Republicans. The casino master did fairly well among all four races in the home of gambling (including winning 29 percent of black men). In Nevada, Trump won (relative to Hillary) 60 percent of whites, 13 percent of blacks, 33 percent of Hispanics, and 37 percent of Asians. But he still lost Nevada because the state is so diverse.

It has become conventional wisdom that Republican candidates lose because their personal bigotry is sniffed out and punished by minority voters. But the truth is that Nevadans rather like Trump. He’s their kind of guy. They just have reasons, though, for voting like their co-racials. Nevada is full of spillover from California (my next-door neighbor, for example, retired from Los Angeles to Las Vegas over 40 years ago), so no Republican has won Nevada since the Bush bubble in 2004.

Eventually, immigration will endanger the Republican hold on Arizona, Georgia, and Texas. Yet in the meantime, as Nate Silver points out, the Republicans may pick up liberal but white Minnesota and New Hampshire. (Of course, the likeliest way for Trump in 2020 to earn the electoral votes of those two states known for good government is to be a good president.)

Ultimately, however, it’s important to note that strategizing is easy compared with implementing. Complimenting me for conceiving 16 years ago the broad brush strategy that Trump executed is a little bit like praising Muhammad Ali for improvising during his 1975 fight with heavyweight champ George Foreman his rope-a-dope strategy of conserving energy by leaning on the ropes and getting George to tire himself by letting him punch him at will.

Of course, Ali’s strategy was dependent upon his being tough enough to withstand getting slugged relentlessly by George Foreman for seven rounds. Similarly, no candidate in history ever withstood more punches, many below the belt, than did Donald Trump in 2016.