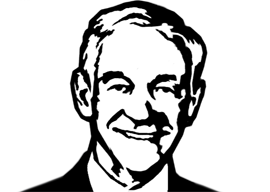 Ron Paul mystifies otherwise intelligent people, especially college-educated people, and they immediately go wistful and quiver with empathy as they think of long-passed family members of the “eccentric uncle” variety. Such voters are not moved by Paul’s message of fiscal responsibility nor his mantra that civil rights, so long as practiced with civility, are none of the government’s business. No, these voters are all agog with nostalgia. They are unconcerned the nation is rapidly approaching bankruptcy. Theirs is a simple reverie for long-gone relatives of whom Paul reminds them. They are led by their hearts and we must pay no attention to whatever facts and figures they give to justify their enthusiasm for Ron Paul, as these genuine folk are merely masking the emotional hold he has over them.

Ron Paul is a verbal magician. By his very use of otherwise ordinary words he transforms vocabulary into a strange tool which speaks in code to the land’s moral trolls and fifth columnists. When Paul advocates “responsibility,” it means “racism.” When Paul says “defense,” it means “isolation.” When Paul recommends “constitutionalism,” it means “anarchy.” It is little wonder his message seduces so many easily obfuscated souls.

Ron Paul is a trickster, a chameleon, a veritable familiar if you will, modeled after the Salem type of old. He confabulates and stupefies and befuddles. He alters all, and one is well advised to be through with him before making the grave mistake of listening to a single concept he has to convey.

Besides, come November there will be ample alternatives. Voters may then choose a presidential candidate who believes in a military budget which is roughly two-fifths the entire world’s, who thinks it is the state’s province to compel its citizens to purchase a historically voluntary service under pain of imprisonment, and who’s confident that whatever the Federal Reserve (AKA Goldman Sachs) dictates is precisely what America and the world needs to do.

That both candidates will agree on these precepts is in no way detrimental. Such a condition is actually better for voters, as it serves to make their selection all the easier absent any true distinction between the two. As long as things don’t change, one could say the choice will be as simple as black or white.