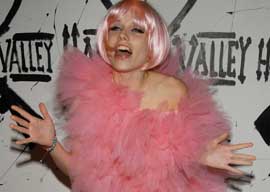 Theodora Richards is wailing “Gimme Shelter” after she was caught by cops inking up a SoHo convent. Oh, but then it got worse for Keith Richards” willowy 25-year-old daughter”she was also carrying pot and pills. The model wild child’s graffiti was a tiny red inscription: T [hearts] A. Who might the lucky gent be? Richards” guilty plea will get her two days of community service and one day in a drug treatment facility. Like father, like daughter.

Baby Houston, we have a problem. Whitney’s daughter Kristina Brown is fuming at her ex-boyfriend for leaking photos allegedly showing her snorting coke. Is Brown, who just turned 18 on Friday, “hooked on cocaine and booze” like the National Enquirer would have you believe? “A former very dear person to me did this. Set me up to make it look exactly what it looks like,” she said in one of numerous defensive tweets this week. “God will smite them yes.”

And then there’s Christina Aguilera. Fresh off her divorce from Jordan Bratman”and many years out of the spotlight while being a doting mother”Aguilera is back and stumbling around like she’s still an undergrad. She was arrested earlier this week for public intoxication, as was her 25-year-old boyfriend Matthew Rutler, who was driving drunk. That’s one way to get the paparazzi hounding you again. Old nemesis Britney Spears is back with a hot single and cover spread, and Christina’s…cavorting around Los Angeles. Whoever thought it”d end up this way?

So you”re a relatively well-liked pol gunning for a 2012 bid. What will help your public approval ratings more than blasting a freshly crowned Oscar winner for having an out-of-wedlock child? Mike Huckabee was struck with foot-in-mouth syndrome this week after calling out Natalie Portman for “glamorizing” unwed pregnancies. Portman, who is engaged to Benjamin Millepied, has yet to comment, but after her Galliano slam, we don”t doubt she will.