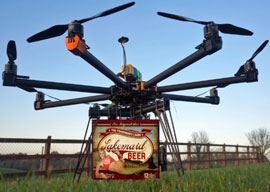 Since consumers loved it and sales soared, it is sad to see the FAA bring down this high-flying ad campaign. But though Lakemaid’s president, Jack Supple, has been buried in an avalanche of federal paperwork, his tribulation may hold a lesson for our troops in the field in South Asia and elsewhere. Inspired by this unsung patriot, the SBI aims to prove that there is more than one way to bring the war to the enemy.

With even Taco Bell pondering helidrone delivery and Domino’s Pizza already flying saucer-like through the air, some of America’s more frankly paramilitary outfits, such as FedEx, have aimed to augment delivery trucks with drone fleets in the next five years”the Federal Aviation Agency projects “7,500 unmanned aircraft in the skies within that period if regulations are in place.” If our military-industrial complex can field a fleet of industrial-strength drones, surely we can spare our troops a hundred glorified toy helis of the sort used in beer commercials. But what for?

For all their gallantry, our forces on the firing line in Afghanistan have learned like the Russians, British, Mughals, and Macedonians before them that exchanging potshots with Pathans on a hot day just makes them ornery.

So instead of having embattled NATO troops call home so an air-conditioned warrant officer on the outskirts of Las Vegas can enjoy firing a sixty-thousand-dollar Hellfire from a four-million-dollar Predator at a two-bit emplacement of hot and thirsty jihadis squatting behind rocks half a world away, why not give the grunts deployed in the ‘stans an air force of their own?

Imagine the Taliban’s tactical dismay if, instead of blowing up a wedding in hope of winging some second cousin of Bin Laden’s late brother-in-law, America’s standard operating procedure on a hot day in the Hindi Kush would be to send a TV-guided octocopter to bombard the petulant Pathans with icy twelve-packs of Old India Pale Ale. Nobody”Sunni, Shiite, or Assassin”in that land of mirth and murder is likely to turn down a frosty brewski or three when it’s 120 degrees in the absent shade, which in terms of the operational art means the farangs” diabolical High Brewsade will befuddle the irate indigenes” aim. Or it may put them to sleep entirely, for at the end of the day, Afghanistan remains a land where opium is the opium of the masses.